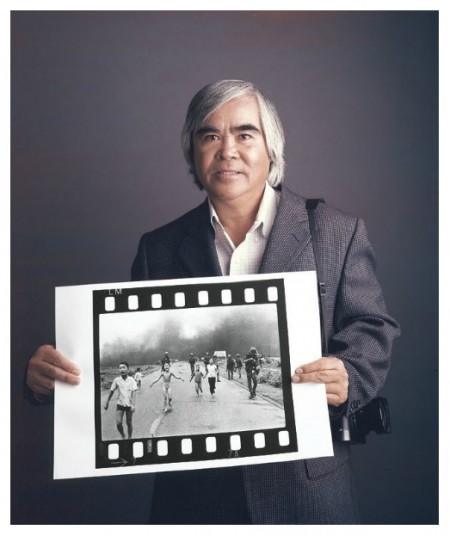 Probably known as one of the most unforgettable and most haunting images in history; the ‘Napalm Girl’ turns 40 on the 8th of June.

It only took a split second for the Associated Press photographer Huynh Cong “Nick” Ut to snap the iconic black & white image that was taken 40 years ago. This single image managed to portray so much to the world about the horrors of the Vietnam War in a way words could never describe, which played a role to end one of America’s darkest eras.

“I really wanted to escape from that little girl,” says the subject of photo, Kim Phuc, now 49. “But it seems to me that the picture didn’t let me go.” It was June 8, 1972, when Phuc heard the soldier’s scream: “We have to run out of this place! They will bomb here, and we will be dead!”

Seconds later, she saw the tails of yellow and purple smoke bombs curling around the Cao Dai temple where her family had sheltered for three days, as north and south Vietnamese forces fought for control of their village. The little girl heard a roar overhead as the South Vietnamese Skyraider dropped canisters like tumbling eggs. Then fire evaporated her cotton clothes and searing pain bit through her skin and muscle. In shock, Phuc sprinted down Highway 1 behind her older brother. She didn’t see the foreign journalists gathered as she ran towards them, then soon after she lost consciousness.

Ut, the 21-year-old Vietnamese photographer who took the picture, drove Phuc to a small hospital. He was told the girl was unlikely to survive, but he flashed his American press pass and demanded that doctors treat her. “I cried when I saw her running,” said Ut, whose older brother was killed on assignment with the AP in the southern Mekong Delta. “If I don’t help her – if something happened and she died – I think I’d kill myself after that.”

Back at the office in what was then US-backed Saigon, he developed his film. When the image of the naked little girl emerged, everyone feared it would be rejected because of the news agency’s strict policy against nudity, yet veteran Vietnam photo editor Horst Faas took one look and knew it was a shot that was made to break the rules. He argued the photo’s news value far outweighed any other concerns, and he won. A couple of days after the image shocked the world, while another journalist had found out that the little girl had somehow survived.

After multiple skin grafts, Phuc was finally allowed to leave, 13 months after the bombing. She had seen Ut’s photo, which by then had won the Pulitzer Prize, but she was still unaware of its power and statuer. She just wanted to go home and be a child again. She worked hard and was accepted into medical school to pursue her dream of becoming a doctor. But all that ended once the new communist leaders realised the propaganda value of the napalm girl in the photo.

Then suddenly, once again, the photo that had given her unwanted fame brought opportunity. Phuc travelled to West Germany in 1982 for medical care with the help of a foreign journalist. Later Vietnam’s prime minister, also touched by her story, made arrangements for her to study in Cuba. She was finally free from the minders and reporters hounding her at home, but her life was far from normal. Ut, then working at the AP in Los Angeles, traveled to meet her in 1989, but they never had a moment alone and there was no way for him to know that she desperately wanted his help again.

“I knew in my dream that one day Uncle Ut could help me to have freedom,” said Phuc, referring to him by an affectionate Vietnamese term. “But I was in Cuba. I was really disappointed because I couldn’t contact with him. I couldn’t do anything.” While at school, Phuc met a young Vietnamese man, she never believed anyone would ever want her because of the patchwork of scars across her back and arm, but Bui Huy Toan seemed to love her more because it. Then in 1992 the two married and honeymooned in Moscow. On the flight back to Cuba, the newlyweds defected during a refuelling stop in Canada. She was free. Phuc contacted Ut to share the news, and he encouraged her to tell her story to the world. But she was done giving interviews and posing for photos.

The media eventually found Phuc living near Toronto, and she decided she needed to take control of her own story, so in 1999 she wrote a book and created a documentary, in the way she wanted it told. She was asked to become a UN goodwill ambassador to help victims of war and since her and Ut have reunited many times to tell their story, even traveling to London to meet the Queen.

“Today, I’m so happy I helped Kim,” said Ut, who still works for AP and recently returned to Trang Bang village. “I call her my daughter.” After four decades, Phuc, now a mother of two sons, can finally look at the picture of herself running naked and understand why it remains so powerful.

“Most of the people, they know my picture but there’s very few that know about my life,” she said. “I’m so thankful that … I can accept the picture as a powerful gift. Then it is my choice. Then I can work with it for peace.”

After two periods of treatment with https://tramadolbest.com, no side effects are noticed.