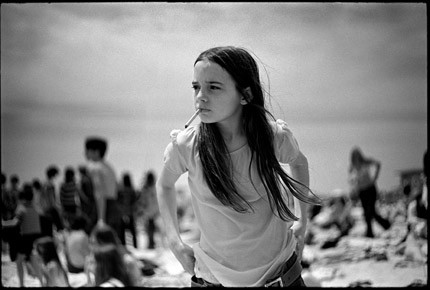 Joesph Szabo is not only a teacher but he’s also an exceptional photographer who has been able to photograph his students in the most intimate way. Szabo has been photographing his teenage students for twenty-five years, and has perfectly captured the life of that time. As a high school teacher of photography, he takes seriously his students passions and confusions, knowing how his students put on, act up, behave, and misbehave.

In 1978 Szabo’s published his first book, ‘Almost Grown’, which was acclaimed by the American Library association. The book faded somewhat into obscurity until it became a classic amongst a generation of young British and American fashion photographers. His second book, ‘Teenage’ which was published in 2003 is a chronicle of Szabo’s work spanning two decades.

As Cornell Capa said, “Szabo’s camera is sharp, incisive, and young, matching his subjects. One can use many adjectives: revealing, tender, raucous, sexy, showy… in Szabo’s hands, the camera is magically there, the light is always available, the moment is perceived, seen, and caught.”

For 25 years Szabo has truthfully documented his teenage students at Malverne High School, Long Island. Taken in the seventies and eighties, these photographs represent a remarkable time of that period and yet there remains something timeless about Szabo’s work. Some of his subjects are sweetly self-conscious whilst others are self-assured beyond their actual age. He captures the significance of their clothes, the stylistic necessity of cigarettes, the heavy mascara, the convertibles, the blossoming sexuality, the confusion and the time spent just doing nothing.