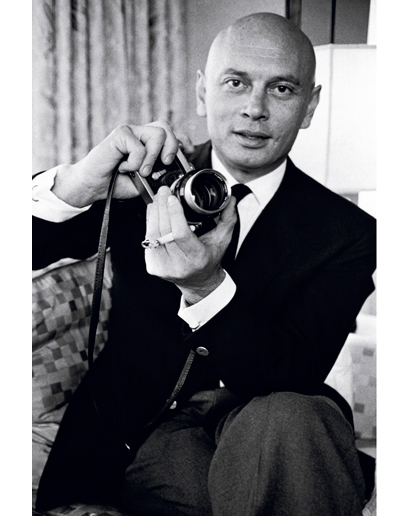 ‘When I am dead and buried, on my tombstone I would like to have it written, “I have arrived.” Because when you feel that you have arrived, you are dead.’

Yul Brynner’s reputation as one of the twentieth century’s most charismatic and versatile actors is irrefutable, in which he is best known for his unforgettable performance on stage and screen of King Mongkut in The King and I, for which he won both Academy and Tony Awards for. Yet the public know very little about his other talents; as well as being a very talented actor he also became a very talented unknown photographer who had been relatively unacknowledged. Brynner’s subjects are some of the pivotal figures of cinematic and stage history, and his talent lies in capturing these people and particularly actors (those best at disguising their true selves) at ease, both on and off set: Charlton Heston as Moses in The Ten Commandments, Audrey Hepburn in a gondola in Venice, Elizabeth Taylor relaxing in the pool with her daughter.

The exhibition has been put together by Brynner’s daughter, Victoria Brynner, and coincides with the recently published book of the same name (Yul Brynner – Photographer), as well as that book there is one he also published which enclosed his photography as well as Magnum photographer Inge Morath’s work, entitled  ‘Bring Forth the Children: A Journey to the Forgotten People of Europe and the Middle East’ (1960). Yul Brynner was an actor, director, musician and photographer, being one of Hollywoods most respected performers. Brynners other films include The Buccaneer (1958), The Magnificent Seven (1960) and Westworld (1973). Please take a look below at some of his beautiful unknown work that will be displayed at The Little Black Gallery.