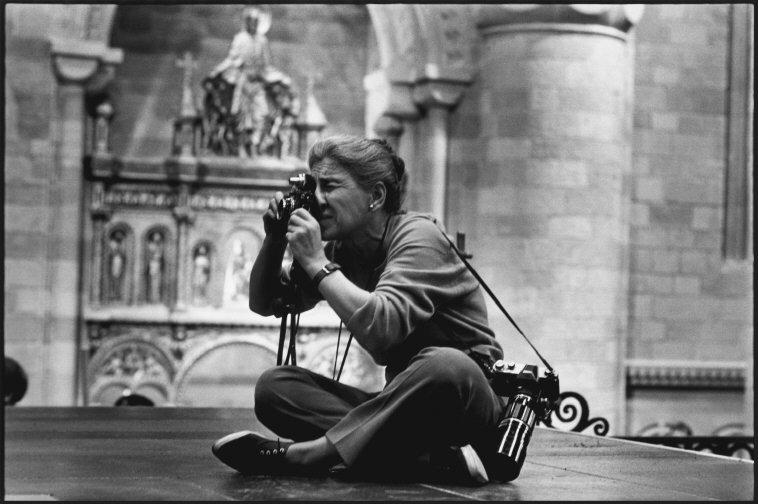 ‘You can’t make a great musician or a great photographer if the magic isn’t there.’

Eve Arnold, a truly unforgettable and iconic photographer who was known for her close interaction with various Hollywood stars such as Paul Newman, Joan Crawford and Elizabeth Taylor, but she was especially known for her close relationship with icon Maryliyn Monroe. Yet, as well as focusing her camera on this glamours life style, she also captured migrant labourers, New York bartenders, Cuban fishermen and Afghan nomads, showing how she had a way of connecting to a wide majority of people.

In 1951 Arnold became the first women to be associated with Magnum Photos becoming a full member in 1957 to the prestigious Magnum Photos cooperative agency — not quite a feminist, but someone who believed that women saw the world through a different lens. Arnold was also one of the first westerners to be granted a visa after America and China established diplomatic relations. In China, during two three-month trips, she would complete, in the late 1970s, a project on daily life in the much-misunderstood country. Eve Arnold, fell in love with photography after a boyfriend gave her a camera, who insisted that she should learn how to use it. It was a $40 Rolleicord, the cheaper version of the Rolleiflex and her first picture was of a Homeless person on the New York waterfront. Arnold’s Photographic career began in 1946, when she worked for Stanbi Photos, a photo-finishing plant in New Jersey as well as studying photography with Alexei Brodovitch at the New School for Social Research in New York; five years later after joining Magnum she moved to London where she continued to work.

Petite but powerful, she will be remembered for her generous spirit and her compassionate eye. Eve Arnold, who joined the agency over half a century ago, sadly died on the 4th of January, which was announced by Magnum Photos saying that she died peacefully in a London nursing home, aged 99. “It’s important to imagine what it was like to be who she was when she first came into Magnum, and the world she grew up within. She spoke from the point of view of a woman.” said Susan Meiselas, a Magnum photographer who joined in 1976. Ms. Arnold, helped Meiselas into the Magnum world. Although there were other women in the group at the time, Ms. Arnold was the elder female photographer, very aware of  what it meant to be a part of the community and what it meant to be a woman in a very male-dominated group and practice. “Eve was a dynamo, she might have been small and compact, but she was just unbelievably productive and hugely generous. She didn’t hold back in a gang of men. She was very present and encouraging and generous, in a sense — to me as a young woman, but also in a collective spirit.”

In the late 1940s, she studied with Alexey Brodovitch at the New School for Social Research in New York, alongside Richard Avedon. In the 1950s, she documented the Harlem fashion scene, attracting the attention of Henri Cartier-Bresson. Within Magnum, she was deeply involved with the “In Our Time” project and with “Magna Brava: Magnum’s Women Photographers.” She was dedicated to her work, more out of curiosity for her subjects, through this she captured mesmerising work — including fashion in Harlem and Malcolm X

In an interview she had with the British Journal of Photography, in 2000, she said that Magnum had been very important in her career. “I had a sense of belonging to a group who were doing good things – a quite remarkable bunch of people in the very beginning- and I was part of it and it was good to be there, helping to shape photojournalism, not only for yourself but for other people in the field.” The Magnum photographers were the first to pioneer the use of their own copyright, for example. “If we contributed anything that’s what we did, we refused work unless we owned the copyright, and there were times when we were very broke and we needed the money.” The Bristish Journal of Photography spoke to Magnum about how she will be remember , they said, “She will perhaps be best remembered for her exceptional photographs of people; the famous, politicians, musicians, artists and the unknown. Her intimate, sensitive and compassionate ten year collaboration with Marilyn Monroe has cemented her as one of the most iconic portrait photographers of our time, but it is the long term reportage stories that drove Arnold’s curiosity and passion.”

Working for Magnum, Arnold quickly gained respect for her work. However, she was keen to point out that, as a female photojournalist in a male dominated field, she never felt restricted by her gender; “It was a big plus to be a woman working in those days. Men liked to be photographed by women. It’s never been a problem. There were very few of us in the beginning and a couple of guys at Magnum were into patting me on the head, saying ‘There, there little one,’ which I found patronising. But although I do think that women think differently and have something to offer that men don’t have, I don’t believe you can recognise the different between women’s photographs and men’s.” She explained to BJP. During the Vietnam War, Arnold expressed the wish to cover the conflict to the Sunday Times art director Michael Rand, who kept saying: “you can’t run fast enough. I had done difficult assignments working in Harlem when it was dangerous to go near it; working alone in the mountains in Tibet and Afghanistan;” she had never done war. Instead, Arnold’s career focused on people and personalities as disparate as Malcolm X, Joseph McCarthy, Marlene Dietrich, Joan Crawdord and Richard Nixon. But each time, she would challenge the convention of portraiture with an intriguing insight into the human condition. During her long career, Arnold published more than 15 monographs. Later this month,  TeNeues will release a in depth book entitled All About Eve, a 216-page retrospective of her work, including some of her most iconic images, as well as many never-before published images.

Eve Arnold was an extremely compassionate and considerate photographer who won the trust of her subjects by treating them with unusual courtesy and by reassuring them that her work would be used in the right manner,for instance; in the 1950s she was hired to photograph Joan Crawford, who wanted to promote her new movie, “Autumn Leaves.” By Ms. Arnold’s account, Ms. Crawford arrived spectacularly inebriated, kissed her on the mouth, stripped naked and demanded to be photographed. Ms. Arnold demurred at first, then took the pictures. A few days later, over lunch, Ms. Arnold handed the negatives to Ms. Crawford, assuring her that they would never be published. Ms. Crawford thanked her by allowing her to do a day-in-the-life photo feature about her. The pictures, which appeared in LIFE, are an up-close study of an aging star coping with her fading beauty — applying makeup, for instance, and struggling with that girdle.

This shows that she was a truly trusted, devoted and compassionate photographer, not just to her work but also to her subjects allowing them to put 100% trust in her.