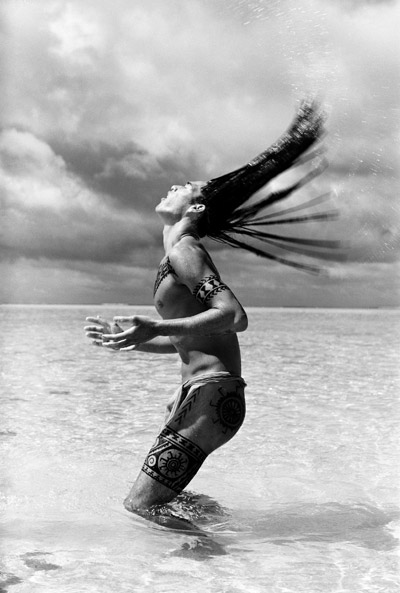 Gian Paolo Barbieri is Italian born photographer, who has been a master of photography for half a century. His unforgettable work has been published in Vanity Fair, Vogue Italia, Vogue Paris, GQ and many others. Furthermore he has created many different advertising campaigns for major brands such as Elizabeth Arden, Chanel, Dolce & Gabbana, Mikimoto and many more, displaying his unique style though out them all. Barbieri has photographed iconic figures such as Audrey Hepburn, Angelica Huston, and Iman, which are among the most famous fashion photographs of all time!  The Photographs below are only a small selection of his fantastic work, from his exceptional fashion shots, to his intemate photographs in remote areas of the world; capturing the culture of  Madagascar, Tahiti, and the Seychelles. He has made several trips to these areas in the 90s, which allowed him to explore these secluded places in, in-depth detail, resulting in these remarkable images. Barbieri manages to create, even in his photographs that have been taken outside, a “perfect” like quality, as though they had been made in the studio, yet unlike the studio, they combine the spontaneity of the people and those places, with elegance and style. The bottom row of photographs reveal Barbieri’s deep interest and love for nature and Polynesian culture, unveiling a culture in its purist form.