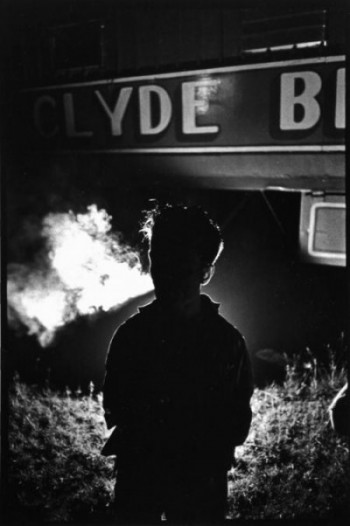 At the age of 77, Bruce Davidson remains as one of the world’s great photographers – since 1958 he has been a member of the esteemed Magnum Photos agency. He has taken inspiration from his friend and mentor, Henri Cartier-Bresson, and went on to redefine the genre of photojournalism with his unique style and methods. Unlike other photographers before him, and what made his photography original was that Davidson would embed himself into the world of his subjects for prolonged periods. In 1958 he joined a circus just so he could get the right pictures, resulting in a series of powerful photo-essays. “Brooklyn Gang” and “East 100th Street” which are perhaps his two most famous series, resulting of many months living with both a gang of youths on Coney Island, and the residents of a run-down tenement block in Harlem, New York.  Through Davidson dedciating his time and effort to these various series,  he has brought us incredible visuals, documenting the struggle and celebration of peoples lives, conveying his true love and dedictaion to photography. The exhibition at the Chris Beetle Fine Photographs Gallery, will focus on several of Davdison’s  key photo-essays such as, The Circus, Brooklyn Gang, Civil Rights Movement, East 100th Street, England/Scotland/Wales – 1960, and Central Park.

As he once said: ‘My pictures are not escapes from reality, but a contemplation of reality, so that I can experience life in a deeper way.’

He has been the recipient of numerous awards, including a Guggenheim Fellowship, and two grants from the USA’s National Endowment for the Arts. He has had solo exhibitions at many major institutions including the Museum of Modern Art – New York, Tate Modern – London; and the Smithsonian Museum of American Art – Washington DC.

“So I have done what I wanted to do, I have seen everything, misery, celebrity, the beautiful people, the wicked ones, generosity and hatred. But I think I have gone beyond my vision. In the heart of my own life, in the heart of other people’s lives. Perhaps that is the most important thing I have done.”

If your in Central London make sure you go and get a glimpse at Bruce Davidson’s remarkable work. Here are a few that are on show at the gallery.