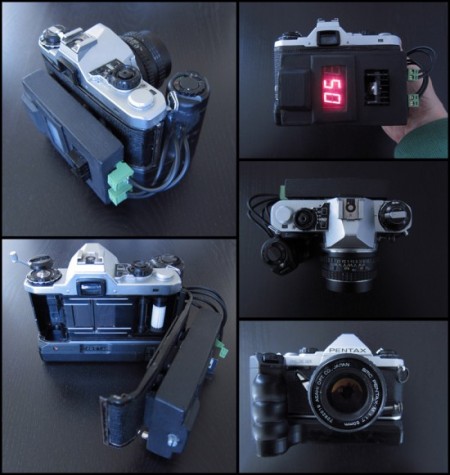 James Guerin, a photographer decided to attempt to make his very own slit-scan attached to a Pentax ME Super, and as you can see from the fantastic results below, it proved to be possible.

A “Slit-scan” is a specalised technique where a moveable slide, into which a slit has been cut, is inserted between the camera and the subject to be photographed. You may recognise this technique “photo-finish” which has been used, for example, in the Olympics or horse racing. It is based upon the camera’s relative movement in relation to a light source, combined with a long exposure time. The image produced from it is made up of many narrow slices, assembled side by side along a timeline of the event being photographed.

Before Guerin started his journey into making a slit-scan that fitted on to a Pentax ME Super, he tested out his idea with first a pinhole camera and then an old medium format folding camera that had one speed, which unfortunately only worked well for fast moving objects.

‘The latest incarnation (finished 3 years after the original) includes an electronic speed control circuit wired into the power winder. The circuit has an l.e.d. readout of the % power level and this equates to a speed of the film which I have manually measured for each setting. I can now make slit-scan images of things moving at a range of speeds. There’s one formula that governs the setting up of a slit-scan (that’s if you want to preserve scale and not compress or elongate your subjects – though that can be interesting too!). Film speed  = (Focal length of lens x  subject speed) /distance between camera and subject ‘

‘….note how the slit-scan technique makes everyone appear to be walking in the same direction (shown below). The woman in red and the woman putting her coat on are actually walking to the right. This effect is because the image is a time-line and everything is made to appear to move in the same direction that the film is travelling.’