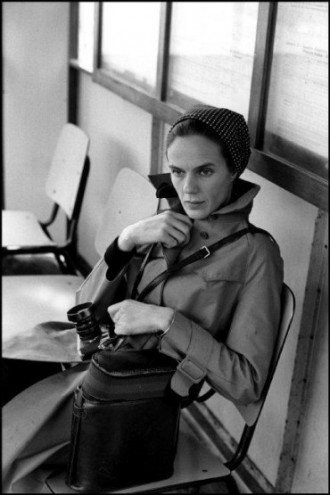 “My grandfather killed himself falling off the dike in Ostend while photographing my two cousins. This can happen so easily when looking through a lens: for a split second nothing else exists outside the frame…”

On the 16th of August the sad news was confirmed that a tremendous and one of Magnums most elegant and iconic photographers, Martine Franck passed away, at the age of 74 after a long battle to cancer. Franck was one of only a handful of women who were invited to join Magnum Photos in the early 80’s and who went on to become president for the agency from 1998 to 2000.

She was a distinctive photographer with some members referring to her as a photographer who represented all that Magnum was. Even though she lived partly in the shadow of her renowned husband Henri Cartier-Bresson, she composed distinctive and thought provoking images ranging from portraits of the rich and famous to pictures of the poor. Each image she brought poise, elegance and exceptional amount of trust to her photographs.

Franck says this about her photography, ‘I think I was shy as a young woman and realised that photography was an ideal way of expressing myself, of telling people what was going on without having to talk’. Franck’s work is mainly distinguished by her interactions with the lives of anonymous poor and elderly people creating timeless work that oozes elegance and a dedicated eye. As well as this she managed to assemble a remarkable portfolio of portraits of famous authors and artists, including figures like  Seamus Heaney, Marc Chagall and Diego Giacometti as well as many intriguing portraits of her late husband Henri Cartier-Bresson.

Martine Franck was born to a Belgian banker, Louis Franck, and his British wife, Evelyn, in Antwerp. With the outbreak of hostilities in 1939, her father, who made his career in London, joined the British army. The rest of the family were evacuated to the US and spent the war on Long Island and in Arizona. After finishing off her studying of the history of art at Madrid University and Ecole du Louvre in Paris, her father started to move in artistic circles and one of her first portraits was of a sculptor, Etienne Martin. In 1963, she went to China, were she took her cousin’s Leica camera with her, and discovered how enjoyable it was to document other cultures. Returning home via Hong Kong, Cambodia, India, Afghanistan and Turkey, she paused to visit the theatre director Ariane Mnouchkine and bought her first camera in Japan, a Leica which she predominantly used black-and-white film for, that carried on with her throughout her career.

Returning to France, she worked as a photographic assistant at Time-Life, while developing her own technique. Early mentors included people like Eliot Elisofon and Gjon Mili, yet she also took inspiration from extremely different female photographers as influences: Julia Margaret Cameron, for her portraits, and Dorothea Lange and Margaret Bourke-White. For example Bourke-White’s use of light and geometric shapes is arguably displayed in Franck’s most iconic image, the poolside at Le Brusc,t Provence, taken in 1976 (shown below). Describing her experience of capturing it as: “I remember running to get the image while changing the film, quickly closing down the lens as the sunlight was so intense. That’s what makes photography so exciting.”

Franck’s work was used in many publications such as Vogue, LIFE and Fortune for which she shot portraits of women in public life, including her fellow photographer Sarah Moon and Mnouchkine, who made Franck the official photographer to her Théâtre du Soleil. Her keen interest with masks and disguises found an outlet in Mnouchkine’s ambitious deployment of kathakali, kabuki and commedia dell’arte. Their collaboration led to Franck’s first experimentation with colour.

In 1966, Franck met Cartier-Bresson, who epitomised the Magnum agency’s tradition of humanitarian photography. Franck was adamant that she would neither bask in his reflection nor disappear in his shadow and she joined the Vu agency in 1970 as well in the same year she married Cariter-Bresson. With Vu’s agency’s demise, Franck co-founded the Viva agency in 1972. This also collapsed but in 1980 Franck joined the presitgious Magnum Agency, becoming a full member in 1983 and became one of the few majority of women to be accepted into the agency. In 2002 Franck set up the Fondation Henri Cartier-Bresson which she worked hard to launch with their daughter Melaine but sadly two years later after the launch Henri Cartier-Bresson died. Even after her diagnosis with bone marrow cancer in 2010, she continued to display her work and managed to put on exhibitions earlier this year at the Howard Greenberg Gallery in New York and at the Claude Bernard Gallery in Paris.

In a statement issued by Magnum Photos president Alex Majoli on the 18th of August about Martine Franck, it says:

‘It is with great regret and profound sadness that I have to announce the passing of Martine Franck. Martine was not only an incredibly talented photographer, she was also a dear friend and colleague to us and an inspiration to many.

‘Magnum has lost a point of reference, a lighthouse, and one of our most influential and beloved members with her death.

‘Her wisdom, wit and intelligence will be missed immensely by all of us. ‘Goodbye Martine.’

“A photograph isn’t necessarily a lie, but nor is it the truth. It’s more of a fleeting, subjective impression. What I most like about photography is the moment that you can’t anticipate: you have to be constantly watching for it, ready to welcome the unexpected.”