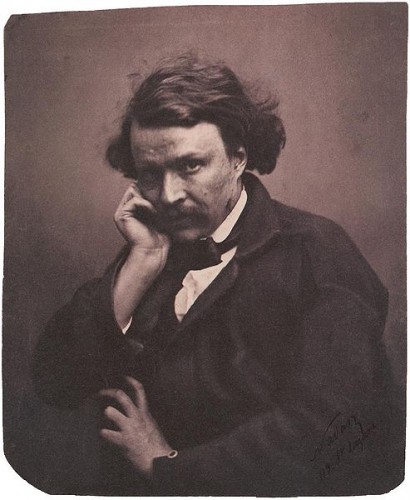 “The portrait I do best is of the person I know best.”

Gaspard Félix Tournachon known to the photography world as Nadar who was a colourful writer, a caricaturist, a balloonist, a part-time political activist, a photographer, and a friend of the painters, writers, and intellectuals in Paris during the time of Napoleon III. Remembered as a master of photography, for his timeless portraits that he made of his great contemporaries. Nadar’s name derived from his nickname (“tourne a dard”) meaning “bitter sting”, which he earned for his caricatures.

Born into a family of printer tradespeople, young Nadar became interested in many of the era’s most daring ideas in politics, literature, and science. After an ordinary middle-class education and a brief attempt at medical school, he turned to journalism, first writing theater reviews and then literary pieces. Although a career in literature seemed assured, he gave up writing in 1848 to enlist in a movement to free Poland from foreign oppressors, an adventure that ended suddenly when he was captured and returned to Paris.

This was followed with a period of involvement with graphic journalisms during which he created cartoons and caricatures of well-known political and cultural figures for the satirical press. Only mildly successful financially, it made Nadar an immediate celebrity; more importantly, this introduced him to photography.

In 1853, Nadar set his brother Adrien, as a photographer and took lessons himself, apparently with the intention of joining him in the enterprise. Together they where able to set up their own portrait studio based in the Rue St. Lazare, Paris. However, despite the evident sensitivity of Adrien’s portrait of the sculptor Emile Blavier, his lack of discipline is believed to have caused Nadar to open a studio on his own, moving eventually to the Boulevard des Capucines. This misbehaving was due to Adrien using Félix’s name at Universal Exhibition of 1855 where he had won a gold medal for his work. This prompted a lawsuit which Félix finally won in 1857.

Continuing his bohemian lifestyle, he filled the studio with curiosities and objets d’art and entertaining personalities in the arts and literature, but despite this flamboyant personal style he remained a serious artist, his intent being on creating images that were both life-enhancing and distinguished. Ever open to new ideas, Nadar was the first in France to make photographs underground with artificial light and the first to photograph Paris from the basket of an ascendant balloon! Combining his interest in balloon flying, in 1858 he received a patent for this, and became the first to take pictures from the air. His balloon was enormous, had a two-story gondola, capable of carrying up to fifty men. The balloon had its own darkroom, the process at the time requiring exposure and development whilst the plate was still wet.

Nonetheless, he was instrumental in setting up the balloon postal service that made it possible for the French government to communicate with those in Paris during the German blockade in the Franco-Prussian War of 1870. Ruined financially by this brief but devastating conflict, Nadar continued to write and photograph, running an establishment with his son Paul that turned out slick commercial work. Constantly one for breaking the mould, at one point he lent the photo studio to a group of painters who wished to bypass the Salon in order to exhibit their work, thus making possible the first exhibition of the Impressionists in April, 1874.

Although he was to operate still another studio in Marseilles during the 1880’s and 90’s, Nadar’s last photographic idea of significance was a series of exposures made by his son in 1886 as he interviewed chemist Eugene Chevreul on his forth birthday, thus foreshadowing the direction that picture journalism was to take.

Cialis is one of the best medicines at https://cialico.com designed to increase libido and suppress the problem of premature ejaculation.

During his last years he continued to think of himself as “a daredevil, always on the lookout for currents to swim against.” At his death, just before the age of ninety, he had managed to create an outstanding body of work that can still be analysed and admired today. Nadar being one of the people who paved the way for photography, breaking the rules and regulations for at the time this new medium, leaving behind a bold and inspiring legacy. Happy Birthday Nadar!