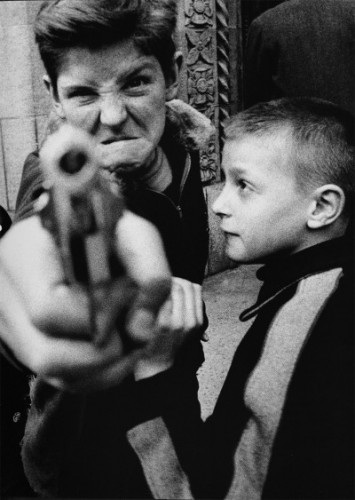 “A prodigious, giant of film, photography and graphic publications, William Klein is one of the true great forces of the 20th and 21st century,” says Marcus Bury from the HackelBury gallery, Klein’s gallerist in London. “William’s work has blasted a trail of innovation and has had a major influence on the many artists who have followed in his wake. His is a career most worthy of celebration. Klein’s documentaries, his films of satire, political commentary and anarchy, his studies of cities and icons of fashion all continue to inspire artists, graphic designers, filmmakers and photographers to this day. Never one to steer clear of controversy or confrontation, William Klein is a true master of the creative arts.”

Originally he trained as a painter, studying under Fernand Légerand where he found early success with exhibitions of his work. However, he soon moved on to photography and achieved widespread fame as a fashion photographer for Vogue and for his photo essays on various cities. Despite having no training as a photographer, Klein won the Prix Nadar in 1957 for New York, a book of photographs taken during a brief return to his hometown in 1954. Klein’s work was considered revolutionary for the time and for his extensive use of wide-angle and telephoto lenses, natural lighting and motion blur.

Klein’s work will also be the subject of a Tate exhibition from 10 October 2012, alongside the works of Daido Moriyama. Taking as its central theme the cities of New York and Tokyo, the exhibition William Klein + Daido Moriyama will explore both artists’ celebrated depictions of modern urban life. Simon Baker of Tate says: “Klein’s iconic photobooks of the 1950s and 60s: Rome, Tokyo and most famously Life is Good & Good for You in New York, Trance Witness Revels are rightly recognised as among the most important and influential in the history of photography. As his photographic practice shows, Klein has always been brilliant, exacting and uncompromising, with a unique and unmistakable critical vision of 20th century life. His Outstanding Contribution to Photography Award from the World Photography Organisation is recognition of a body of work of incredible diversity, depth and individuality.”