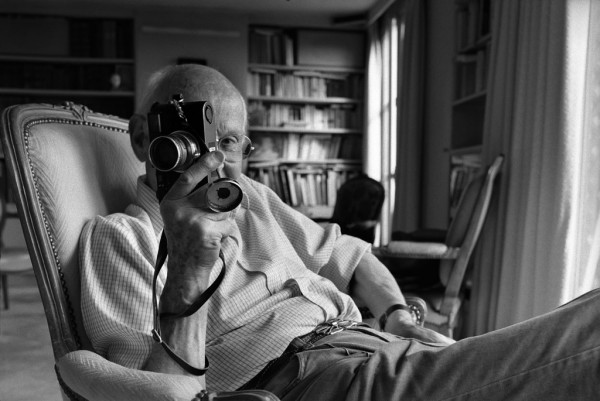 “For me the camera is a sketch book, an instrument of intuition and spontaneity, the master of the instant which, in visual terms, questions and decides simultaneously. It is by economy of means that one arrives at simplicity of expression.”

The man who spent more than three decades of his life dedicated to the craft of photography to compose and capture unforgettable fleeting moments or ‘Decisive moments‘. Travelling without bounds, documenting some of the great upheavals of the 20th century Henri Cartier-Bresson was a truly incredible photographer who became the father of modern photojournalism. An early adopter of the 35mm format, and the master of candid photography who helped develop the “street photography” style that has influenced many generations of photographers.

Cartier-Bresson was born in Chanteloup-en-Brie, Seine-et-Marne, France, and was the oldest of five children. His father was a wealthy textile manufacturer, whose Cartier-Bresson thread was a staple of French sewing kits. His mother’s family were cotton merchants and landowners from Normandy, where he spent part of his childhood. The Cartier-Bresson family lived in a bourgeois neighbourhood in Paris, near the Eur Bridge. As a young boy, Cartier-Bresson owned a Box Brownie, using it for taking holiday snapshots; yet he later experimented with a 3×4 inch view camera.

In 1927, at the age of 19, Cartier-Bresson entered a private art school and the Lhote Academy, the Parisian studio of the Cubist painter and sculptor André Lhote. On a trip, Lhote took his pupils to the Lourve to study classical artists and to Parisian galleries to study contemporary art. Cartier-Bresson’s interest in modern art was combined with an admiration for the works of the Renaissance — of masterpieces of Jan van Eyck, Paolo Uccello, Masaccio and Piero della Francesca. Cartier-Bresson often regarded Lhote as his teacher of “photography without a camera.”

In the 1920s, schools of photographic realism were popping up throughout Europe, but each had a different view on the direction photography should take. Cartier-Bresson began socializing with the Surrealists at the Café Cyrano, in the Place Blanche, while there he met a number of the movement’s leading protagonists, and was particularly drawn to the Surrealist movement’s linking of the subconscious and the immediate to their work. In 1930, stationed at Le Bourget, near Paris, he completed his mandatory service in the French Army.

In late 1931 Cartier-Bresson returned to France from his distressing travels in Africa, where he nearly died from Blackwater fever, Cartier-Bresson recuperated in Marseille in late 1931 and deepened his relationship with the Surrealists. He became inspired by Hungarian photojournalist Martin Munkacsi photograph which showed three naked young African boys, caught in near-silhouette, running into the surf of Lake Tanganyika. Cartier-Bresson responded to that photograph by saying:

“The only thing which completely was an amazement to me and brought me to photography was the work of Munkacsi. When I saw the photograph of Munkacsi of the black kids running in a wave I couldn’t believe such a thing could be caught with the camera. I said damn it, I took my camera and went out into the street.”

That photograph inspired him to stop painting and to take up photography seriously. He explained, “I suddenly understood that a photograph could fix eternity in an instant.” Acquiring the Leica camera with a 50 mm lens in Marseilles, which would accompany him for many years describing it as an extension of his eye. The anonymity that the small camera gave him in a crowd or during an intimate moment was essential in overcoming the formal and unnatural behavior of those who were aware of being photographed. He enhanced his anonymity by painting all shiny parts of the Leica with black paint. The Leica opened up new possibilities in photography — the ability to capture the world in its actual state of movement and transformation.

Restless, he photographed in Berlin, Brussels, Warsaw, Prague, Budapest and Madrid. By 1932 he was exhibiting his first exhibition at the Julien Levy Gallery in New York, and subsequently at the Ateneo Club in Madrid. In the beginning, he did not photograph much in his native France, yet he came to photograph it extensively in the later years to come.

In 1934 Cartier-Bresson met a young Polish intellectual, a photographer named David Szymin who was called “Chim” as his name was difficult to pronounce. Szymin later changed his name to David Seymour. Through Chim, Cartier-Bresson met a Hungarian photographer named Endré Friedmann, who later changed his name to Robert Capa. The three of them shared a studio in the early 1930s and Capa mentored Cartier-Bresson, “Don’t keep the label of a surrealist photographer. Be a photojournalist. If not you will fall into mannerism. Keep surrealism in your little heart, my dear. Don’t fidget. Get moving!”

Cartier-Bresson’s first photojournalist photos to be published came in 1937 when he covered the coronation of King George VI, for the French weekly Regards. He focused on the new monarch’s adoring subjects lining the London streets, and took no pictures of the king. His photo credit read “Cartier”, as he was hesitant to use his full family name.

When World War II  erupted in 1939, he joined the French Army as a Corporal in the Film and Photo unit. During the Battle of France, in June 1940 at St. Dié in the Vosges Mountains, he was captured by German soldiers and spent 35 months as a prisoner-of-war camps doing forced labor under the Nazis. He twice tried and failed to escape from the prison camp, and was punished by solitary confinement. On his third attempt he was successful and ended up hiding on a farm in Touraine before getting false papers that allowed him to travel in France. In France, he worked for the underground, aiding other escapees and working secretly with other photographers to cover the Occupation and then the Liberation of France. In 1943, he dug up his beloved Leica camera, which he had buried in farmland near Vosges. At the end of the war he was asked by the American Office of War Information to make a documentary, Le Retour (The Return) about returning French prisoners and displaced people.

In spring 1947, Cartier-Bresson, with Robert Capa, David Seymour, William Vandivert and George Rodger founded of the renewed Magnum Photos. Capa’s brainchild, Magnum was a cooperative picture agency owned by its members. The team split photo assignments among the members. Rodger, who had quit LIFE in London after covering World War II, would cover Africa and the Middle East. Chim, who spoke most European languages, would work in Europe. Cartier-Bresson would be assigned to India and China. Vandivert, who had also left LIFE, would work in America, and Capa would work anywhere that had an assignment. Magnum’s mission was to “feel the pulse” of the times and some of its first projects were People Live Everywhere, Youth of the World, Women of the World and The Child Generation. Magnum aimed to use photography in the service of humanity, and provided arresting, widely viewed images.

Cartier-Bresson was a firm believer that he should compose his photographs in the viewfinder, not in the darkroom and showcased this belief by having nearly all his photographs printed only at full-frame and completely free of any cropping or other darkroom manipulation.

Cartier-Bresson is regarded as one of the world’s most unassuming personalities. He disliked publicity and exhibited a ferocious shyness since his days in hiding from the Nazis during World War II. Although he took many famous portraits, his own face was little known to the world at large (which presumably had the advantage of allowing him to work on the street in peace). He dismissed others’ applications of the term “art” to his photographs, which he thought were merely his gut reactions to moments in time that he had happened upon. Below is a fascinating interview with the iconic 20th century photographer.