This remarkable gun camera was called the Mark III Hythe Machine Gun Camera and was designed to replicate the American made Lewis machine gun. This brilliantly designed camera was used by the British air force during World War I to train their aerial gunners in air-to-air combat. The reason they did this was because 120 film was much cheaper than live the ammunition and the photographs they produced informed the evaluators of how accurate the pilots were during the ‘combat’. This brilliant idea came about in 1915—one year into World War I when bullets were too expensive to use for training, so camera manufacturer Thornton-Pickard come up with a great idea. The idea was so good that it’s still used today by Mavericks and Icemen everywhere!

The Mark III Hythe Machine Gun Camera’s design followed the Lewis Gun blueprint, it was a light automatic machine gun created by US Army Colonel Isaac Newton Lewis in 1911. It was first used mounted on a plane in 1912, when the US Army Captain Charles Chandler fired it from a Wright Model B Flyer. The British military liked it so much that they adopted it for the Royal Air Force’s combat planes.

The Hythe worked like the Lewis Gun: The charging handle advanced the film and cocked the shutter, while the trigger fired the shutter. The focus, aperture and shutter speed were fixed. The top of the camera is shaped to take a dummy magazine, fitting the magazine operates a punch which marks the film to show that it has been changed. The magazine fits on the spindle, when fitted a plunger moves a lever, which in turn operates a punch. The camera produced 16 pictures 4.5 x 6cm on 120 roll film on a removable internal carrier (included), f8/30cm lens. 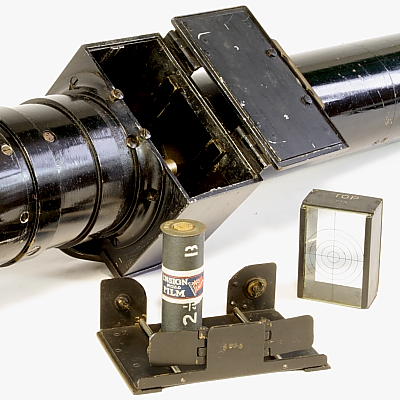