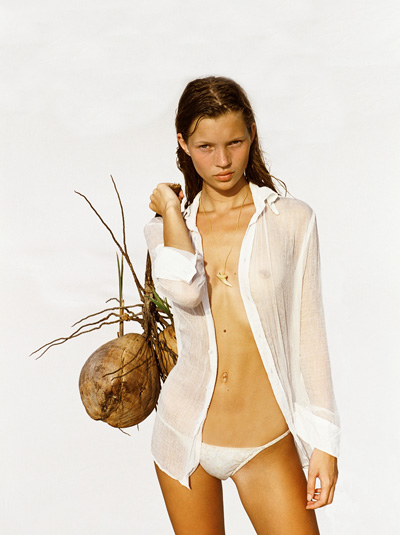 Corinne Day was a self taught British photographer, who brought a more hard and defining edge documentary look to fashion photography, in which she often included elements that related to her subjects life. Day is known for forming close relationships with many of the people she has photographed most famously Kate Moss, which has resulted in some of her most recognizable work. The most well known of her portraits are the photographs of Kate Moss in the 3rd Summer of Love editorial for the FACE magazine in 1990. The photographs, which included one image of Moss topless and another in which it is implied that she was naked, which are actually some of the first published fashion photographs of Moss, who was sixteen at the time (since 2003, following the Sexual Offences Act, designates that those under eighteen are protected and defined as children). In 1993 Day photographed Kate Moss in her own flat for British Vogue. In context to a fashion magazine the images appeared to have a documentary feel and when they where published it caused a certain stir of discomfort.

For the next seven years following Day spent much of her personal time taking photographs for her first book, Diary (Kruse Verlag, 2000), which turned into an extremely personal visual record of her life and friends. Days work has been exhibited in many different galleries/spaces such as the National Portrait Gallery, Victoria & Albert Museum, Tate Modern, Saatchi Gallery, The Science Museum, The design Museum, Photographers Gallery, Gimpel Fils London and have been included in The Andy Warhol exhibition at the Whitney Museum NY.

Some of the wonderful photographs that will be on display at the Gimpel Fils are shown below. Only less than two weeks left to go and see this fantastic exhibition.