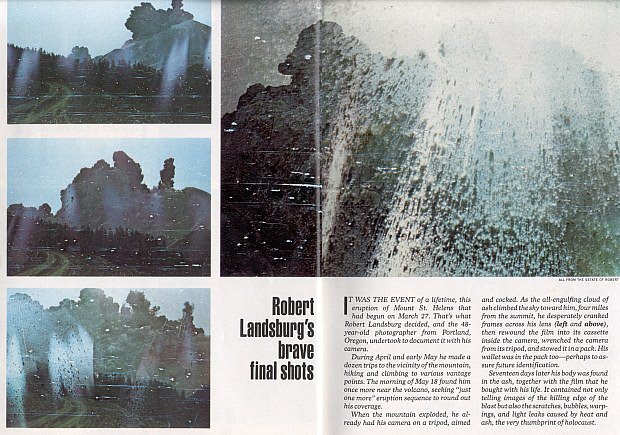 When it comes to your photographs your protective over your work, right? When Mount St. Helens erupted on May 18th, 1980, photographer Robert Landsbury was documenting the changes in the volcano from just a few miles away. Realizing that he couldn’t unfortunately outrun the approaching ash cloud, he kept shooting for as long as he possibly could before packing his precious film away and then using his body to preserve his remarkable images:

He managed to rewind the film back into its case, replace his camera in its bag, put the bag in his backpack, and then lay himself on top of the backpack in an attempt to protect its contents. Seventeen days later, Landsberg’s body was found buried in the ash with his backpack underneath. The film could be developed and has provided geologists with valuable documentation of the historic eruption.

The insightful and shocking images where published in the National Geographic January 1981 issue below says: ‘IT WAS THE EVENT of a lifetime this eruption of Mount St. Helens that had begun on March 27. That’s what Robert Landbury had decided and the 48 year old photographer from Portland, Oregon, undertook to document it with his camera. During April and May he made a dozen trips to the vicinity of the mountain hiking and climbing to various vantage points. The morning of May 18th once more near the volcano, seeking “just one more” eruption sequence to round out his coverage. When the mountain exploded, he already had his camera on his tripod, aimed and cocked. As the all engulfing cloud of ash climbed the sky toward him, four miles from the summit, he desperately cranked frames across his lens (left and below) then rewound the film into it’s cassette inside the camera, wrenched the camera from the tripod, and stowed it in a pack. His wallet was in the pack too – perhaps to ensure future identification. Seventeen days later his body was found in the ash, together with his film that he bought with his life. It contained not only telling images of the killing edge of the blast but also the scratches, bubbles, warping, and light leaks caused by heat and ash, the very thumbprint of  holocaust.’

In a desperate situation like this would any of you photography lovers use your body to protect your film/s?