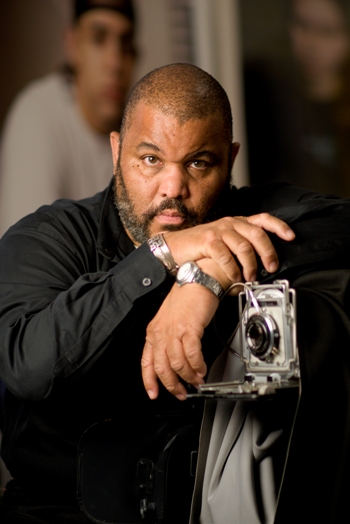 Dawoud Bey is a truly recognisable American born photographer, who is renowned for his large-scale color portraits of the youth and other often marginalised subjects. His work explores youth in a deep and extremely connecting way, photographing them as if ‘they’ were the same age or had known each other longer than just 5 minutes! This skill is shown thought out some of the images below, demonstrating how he really connects to his subject.

“I began making photographs in 1969 after seeing the “Harlem On My Mind” exhibition at the Metropolitan Museum of Art. I had inherited my first camera the year before from my godfather Artie Miller when I was fifteen years old. I began my first project “Harlem, USA” as a direct result of that exhibition and my own family’s history in the Harlem community. Born in Queens, NY my formal training began by apprenticing local commercial fashion photographer Levy J. Smith, followed by later studying at the School of Visual Arts with Larry Siegel, William Broecker, Shelley Rice and Sid Kaplan. I completed my undergraduate work at Empire State College under the guidance of Mel Rosenthal and Joe Goldberg and did my MFA at Yale University in the graduate photography program under the watchful and rigorous eyes of Tod Papageorge and Richard Benson, along with Lois Conner, Frank Gohlke, Susan Kismaric and Joel Sternfeld. Classes with Robert Farris Thompson and Michael Romer significantly rounded out my graduate work. A former Guggenheim and NEA fellow, I am currently Professor of Art and Distinguished College Artist at Columbia College Chicago, where I have taught since 1998.”

By Bey attending the Metropolitan Museum of Art’s exhibition Harlem On My Mind, which included the work of such photographers as James VanDerZee, the experience of it became part of the inspiration for his first photographic series, Harlem, USA, which began in 1975. This was completed in 1979, the Harlem, USA pictures constituted Bey’s first solo exhibition (at the Studio Museum in Harlem) and first publication. He revisited the series in 2005, working from original negatives and vintage prints to produce ten of the original images as a portfolio of carbon pigment prints. The new prints are the same size as those shown in 1979 at the Studio Museum, which marks their first printing since their original exhibition.

His photographs have earned him a variety of fellowships, awards, and commissions. His work has been presented in one-person exhibitions at the Addison Gallery of American Art, Phillips Academy, Andover, Massachusetts; Fogg Art Museum, Harvard University, Cambridge, Massachusetts; Light Work, Syracuse, New York; Studio Museum in Harlem, New York; and Walker Art Center, Minneapolis, Minnesota, which toured a mid-career retrospective. Bey’s work is also included in the collections of the Bibliothèque Nationale, Paris; The Brooklyn Museum, New York; The Museum of the City of New York; and The Schomburg Center for Research in Black Culture, New York, among other institutions. Take a look at some of his creative and truly sublime images.