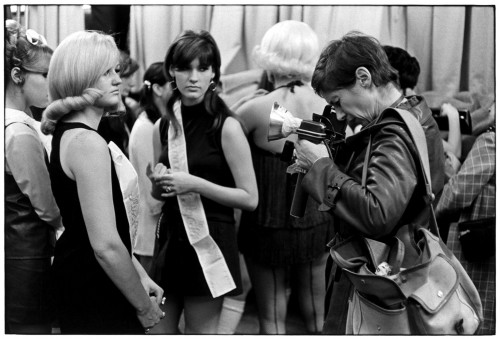 “A photograph is a secret about a secret. The more it tells you the less you know.”

Diane Arbus, an iconic photographer who became known as one of the most distinctive photographers in the twentieth century, renowned for her eerie yet mesmerising portraits of unique subjects. The rebellious and daring photographer would have turned 89 today! Arbus, the daughter of prominent Russeks department store owners, was able to practice her art at a young age, despite growing up during the Great Depression.

Her father became a painter soon after retiring, while her sister a sculptor and her brother a United States Poet Laureate, but Arbus would soon make the biggest splash with her controversial career in photography. Through-out her photographic career her work provoked controversy such as when Norman Mailer once famously said “Giving a camera to Diane Arbus, is like putting a live grenade in the hands of a child.”

Having had a very artistic youth, she soon learned in more depth about photography from her husband Allan Arbus. Together, they found success with fashion work and in 1946, after the war, the Arbuses began a commercial photography business called “Diane & Allan Arbus”, with Diane as art director and Allan as the photographer. Despite them both hating the fashion world they contributed to Glamour, Seveteen, Vogue, Harper’s Bazaar, and many other magazines.

In 1956, Diane Arbus quit the commercial photography business. Although earlier she had studied photography with Berenice Abbott, her studies with Lisette Model which began in 1956 led to Arbus’s most well-known methods and style. She began photographing on assignment for magazines such as Esquire, Harper’s Bazaar, and The Sunday Times in 1959. Approximately in 1962, Arbus switched from a 35 mm Nikon camera to a twin-lens reflex, Rolleiflex allowing her to produce more detailed square images, in which she was able to construct her most distinctive and fascinating work. Arbus was known for establishing close relationships, even checking in from time to time and photographing people again later in life.

Arbus experienced “depressive episodes” during her life similar to those experienced by her mother, and the episodes may have been made worse by symptoms of hepatitis. Arbus wrote in 1968 “I go up and down a lot”, and her ex-husband noted that she had “violent changes of mood. A year later after Arbus sadly took her own life in 1971 at the age of just  48, she became the first American photographer to be exhibited the Venice Biennale, making a huge impact on the global scene. Arbus’ distinct style and uncompromising approach to subjects ignored by the mainstream made her an icon of emerging photographic styles, paving the way for free spirits like Nan Goldin and Dash Snow to practice their own forms of photographic exploration.

Her legacy remains a subject of intense interest and I am sure it will be for many more years to come.