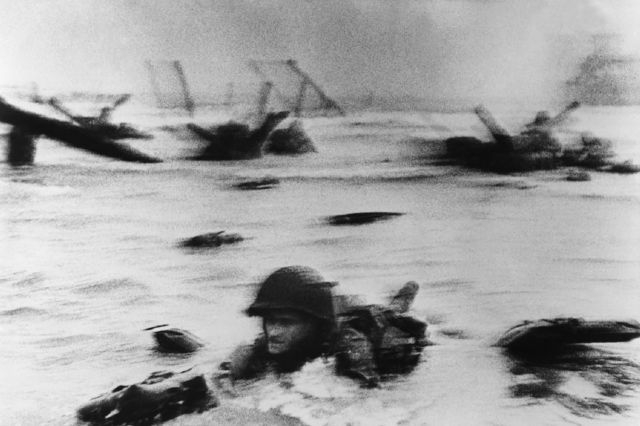 “If your pictures aren’t good enough, you aren’t close enough.”

When the soldiers of the 16th Regiment of the 1st Infantry Division landed at Omaha Beach on the 6th of June, 1944, photographer Robert Capa, who was employed by LIFE magazine, was among these men.

Perhaps the best known of all World War II combat photographers, the Hungarian-born had made a name for himself well before climbing into a landing craft with men of Company E in the early morning hours of D-Day. He risked his life on more than one occasion during the Spanish Civil War and had taken what is considered the most eerily fascinating of all war photographs. His most famous image being the death of Spanish Loyalist militiaman Frederico Borrell Garcia as he is struck in the chest by a Nationalist bullet on a barren Iberian hillside.

Capa was known to say, “If your pictures aren’t good enough, you aren’t close enough.” On D-Day, he came close once again. With Capa standing in the very stern, his landing craft mistakenly came ashore at the section of Omaha Beach dubbed “Easy Red.”

Capa was squeezing off photographs as he headed for a disabled American tank. He remembered feeling “a new kind of fear shaking my body from toe to hair, and twisting my face.” With great difficulty his trembling hands reloaded his camera. All the while he repeated a sentence that he had picked up during the Spanish Civil War: “Es una cosa muy seria” (“This is a very serious business”).

After what seemed an eternity, Capa turned away from the beach killing zone and spotted an incoming LCI (landing craft, infantry). He headed for it. “I did not think and I didn’t decide it,” he later wrote. “I just stood up and ran toward the boat. I knew that I was running away. I tried to turn but couldn’t face the beach and told myself, ‘I am just going to dry my hands on that boat.'” With his cameras held high to keep them from getting waterlogged, Capa was pulled aboard the LCI and was soon out of harm’s way, with his precious three rolls of film with 106 frames exposed. After reaching England, he sped by train to London and delivered his rolls of film for developing.

A darkroom technician was almost as anxious to see the invasion images as Capa himself. In his haste, the technician dried the film too quickly. The excess heat melted the emulsion on all but 10 of the frames. Those that remained were blurred, surreal shots, which ended as a happy accident as they perfectly depicted the chaos and confusion of that day.