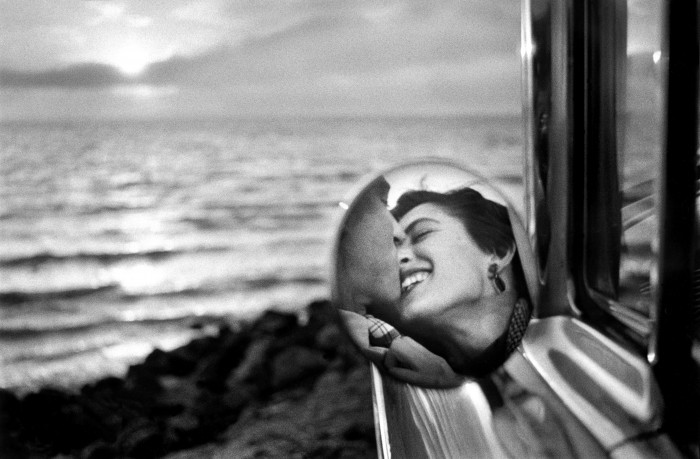 Erwitt is known for diligently juggling two cameras – one for more serious assignments and the other for taking his ‘snaps’. Chris Beetles will be showing a fine collection of diverse and witty images from both. It will also be the first time the gallery has hosted work by this renowned and hugely influential photographer.

Erwitt helped define the ‘snap-shot’ photograph and though his work is often humorous, it belies a fearsome talent for seeing and capturing the moment. With an eye that captures both the serendipitous and touching scenes in life, Erwitt’s photographs make you smile and reflect. As he once said;

‘You can find pictures anywhere. It’s simply a matter of noticing things and organising them. You just have to care about what’s around you and have a concern with humanity and the human condition.’

By 1959 Erwitt had joined the elite Magnum Photo Agency, and quickly became one of its key players. In particular, three landmark assignments in quick succession helped propel Erwitt’s career forward. The first was the famous Nixon/Khrushchev kitchen debate, followed by the launch of the first Sputnik, a Magnum commission for Holiday magazine. The third was for Paris Match where Erwitt was asked to photograph President Charles De Gaulle. Not only did he photograph De Gaulle, but he managed to photograph him flanked by the Soviet leaders President Leonid Brezhnev and Prime Minister Andrei Kosygin in a private hotel suite which in turn made the front cover.

His flair for photographing famous faces and historical moments quickly developed and he went on to capture Jacqueline Kennedy, John Kennedy, Grace Kelly, Muhammad Ali, Marilyn Monroe, Che Guevara, the Pope and many more. In 1961 Erwitt became part of the team on the set of The Misfits, Marilyn Monroe’s last film. Chris Beetles will be showing all of these photographs and many more.

In the late 1960s Erwitt became Magnum’s President, and in the 1970s he turned to film, producing several noteworthy documentaries and comedies. The latter was predictable, as humour has always been at the heart of Erwitt’s practice –

‘I do have a trick for taking portraits on commission. I carry one of these little bicycle horns in my pocket, and once in a while when someone is sour-faced or stiff, I blow my horn. It sort of shatters the barriers. It’s silly, but it works.’

With nineteen books to his name, fashion, corporate and advertising commissions under his belt and a number of worldwide exhibitions, Erwitt has managed to create the perfect balance between the snaps he loves to take, and the commercial consignments he was assigned. Henri Cartier-Bresson, once said,

‘Elliott has to my mind achieved a miracle, working in a chain-gang of commercial campaigns and still offering a bouquet of stolen photos with a flavor, a smile from his deeper self.’

Chris Beetles will be displaying a retrospective selection of Erwitt’s work including a number of portraits, snapshots, visual gags and other key images from his sensational archive.