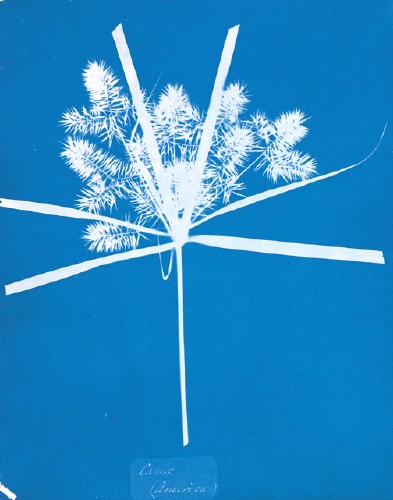 Anna Atkins is said to had been the first woman to create a photograph. Initially she was trained as an English Botanist and discovered photography as a means to document botanical specimens for a scientific reference book, entitled ‘British Algae: Cyanotype Impressions’. This book subsequently became considered to be the first book to demonstrate light-senstive materials in a publication. As well as this, Aktin’s decided to use the Cyanotype process further by printing her hand-written text and illustrations through the means of this photographic process rather than using traditional letter pressing. In 1843 Atkins printed and published Part I of ‘British Algae’, which in turn established photography as an accurate medium for scientific illustration.

Anna Atkins was born in Tunbridge, Kent, England in 1799. Her mother died while Anna Atkins was an infant, which made her particularly close to her father, John George Children, who was a highly respected scientist and a Fellow and Secretary of the Royal Society. After marrying John Pelly Atkins in 1825 she pursued her interests in botany, for example by collecting dried plants which were probably used as photograms later on.

John George Children and John Pelly Atkins were friends of Willian Fox Talbot and in 1841 inspired by the advice from William Henry Fox Talbot she decided to take up photography where she learned directly from Talbot about two of his inventions related to photography: the “photogenic drawing” technique (in which an object is placed on light-sensitized paper which is exposed to the sun to produce an image) and calotypes. By 1843 she had mastered Sir John Heschel’s cyanotype process, and it is said that she might have been personally mentored by him as the Atkins and Herschel families resided only 30 miles apart in Kent, England, and herbotanist father, John George Children, and Herschel were friends.

From 1843 to 1853 she worked constantly to document her large collection of seaweed, which were then released as a 12-part series. In 1853 Anna Atkins teamed up with her childhood friend, Anne Dixon, who began to collaborate in creating photograms of ferns, flowers, feathers and lace. These photograms became something of an artistic expression, although this was not her original goal, many of the photograms of plants can be celebrated as a significant scientific document but also for their thoughtful composition.