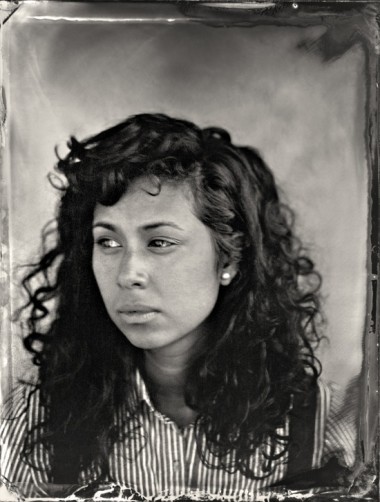 This is normally a rare treat for some people to be able to take or have their photograph taken on a plate, but for the public of San Francisco it is right on their door step! With Micheal Shindler the founder of ‘Photobooth‘ is creating a huge amount of unique Tintypes of anyone who walks in off the street. San Francisco’s Mission district specializes in a nostalgia for the archaic and the analog. This should come as no surprise that the neighborhood hosts Michael Shindler’s Photobooth, a tintype portrait studio where passersby can pop in to get their photo taken. When they’re finished, they walk away with their one off ‘print’ on a piece of metal!

“If it would work anywhere, I think it would be here,” says Shindler, who has had a few experiences doing tintypes for public events at Golden Gate Park and the San Jose Institute of Contemporary Art. “People are into it. I’m amazed at how many people know about this process and what it is, even non-photographers.”

Since they opened in August 2011,Photobooth has made approximately 2,300 tintypes of over 2,000 subjects. Shindler uses a Sinar 4×5 camera, a 150mm Schneider Kreuznach lens, and Profoto strobe lights to make the portraits. The idea for a tintype portrait studio came from a night out drinking with his business partner Vince Donovan. “I was at a bar with Vince — Hotel Utah — just about a year ago. We were just drinking, and he was like, ‘You know, I’ve always wanted to start some Polaroid portrait studio.’ And I was like, ‘I kind of want to do that too, but with tintypes.’”

One of the most surprising things about this whole set up, apart from how popular it has been, is that Shindler has been able to make a 200 year old process into a profitable business, Film’s defiantly not Dead!

“Everyone I know who’s doing it, they’re just independent — like, everyone has a day job. I think I’m the only person I know who actually does this for a living. It’s a little document. It’s like your thumbprint or something. It was struck by you, you know, in a physical way.”

In most of his cases he doesn’t get to choose who he wants to photograph, which tends to lead to surprising results. “And what fun. People just come through the door and I don’t even get to pick who I photograph. Sometimes someone will come in and I’ll be, like, ooh, let me take your picture, or I’ll invite someone to come down. But mostly I just shoot whoever comes through the door.”

If you are lucky enough to be in San Francisco, then make sure you take a trip to see Micheal Shindler at the Photobooth Gallery/studio, all the information is provided at the top of the page.