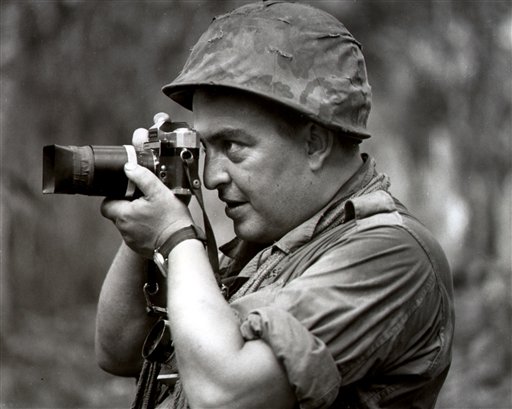 Horst Faas was known as one of the finest war photographers of his era, and this acknowledgement of his haunting yet truthfully shot photographs brought him to win two Pulitzer prizes in 1965 and 1972. Yet he won his legendary status more as a pictures editor and leader who groomed his own “Horst’s army” of younger photojournalists, including Vietnamese. Working for the co-operative US-based Associated Press news agency (AP) for almost all his 50-year career, his photography, editing and pursuit of the truth played a massive role in turning the tide of US public opinion against the Vietnam war. Although many of his staff assumed he was American – with a Kissinger-like accent – he retained German citizenship and retired to Munich, where he sadly died on Thursday at the age of 79.

“Faas carved out new standards for covering war with a camera and became one of the world’s legendary photojournalists in nearly half a century with The Associated Press,” says the news agency.

It was Faas, as AP’s Chief of Photography for South Asia, based in Vietnam as the centre of world news at the time, who selected and transmitted probably the two most-telling and influential images of the war: the first was AP photographer Eddie Adams’s unforgettable 1968 image of the exact moment Saigon’s police chief shot a Vietcong suspect dead at point-blank range in a busy street. The photo won Adams a Pulitzer prize. The second was the photo of a naked, badly-burnt Vietnamese girl fleeing an American aerial napalm attack in 1972, taken by one of Faas’s local protégés, Huynh Cong “Nick” Ut. The photo also won a Pulitzer, much to Faas’s delight since Ut’s elder brother Hunh Thanh My, whom Faas had also groomed as an AP photographer, had been killed three years earlier.Those two pictures awoke Americans to the horrors of a war prosecuted by their leaders, and undoubtedly hastened the end of the conflict. In both cases, Faas had to persuade his bosses in New York to run the pictures: they initially thought the “Saigon Execution” was too shocking for the American public. As for the napalm picture, their first thoughts were that “we can’t show a naked little girl.” Faas prevailed.

Apart from his own pictures, and those of “Horst’s Army,” his job, as AP photo chief in the region, was often to transmit the work of other photographers from around the world. Any newspaper which subscribed to AP – thousands of them – expected the agency to get out to the world the photos taken by its own staffers. Rolls of film carried back from the frontlines, developed in a darkroom – usually a bathroom – contact sheets printed, best images selected and transmitted by wire. Among the great AP photographers mentored by Faas in Vietnam were the tiny Frenchwoman Cathy Leroy and the French-Vietnamese Henri Huet. All the combat photographers of the era popped into the AP bureau, including the Londoners Don McCullin and Larry Burrows. (Burrows and Huet died in 1971 when their helicopter was shot down in Laos.)

Horst Faas was born in Berlin in 1933 to Adalbert and Gerda Faas and grew up during the rise of Hitler. Like everyone of his age, he was forced to serve in the Hitler Jugend during the war, standing to attention in school “for Führer and Vaterland.” Among his early memories were the noise of allied air raids and of anti-aircraft fire. When he was 12, with Soviet forces spreading through eastern Berlin and Germany, his family fled to Munich. At the age of eighteen he moved to London where he took up a job as a darkroom assistant with the Keystone press agency. Faas found himself mixing chemicals and drying contact sheets in Keystone’s offices in Red Lion Court, an alley away from Fleet Street, where he soon improved his English in the historic Cheshire Cheese pub.

In 1956 he left to join AP as a photographer, covering the conflicts in the Congo and Algeria before being assigned to Vietnam in 1962. Arriving on the same day was AP reporter Peter Arnett, who would work with Faas for many years and go on to global fame with CNN and others. In sharp contrast to modern days, Faas would charm his way – often involving cigarettes – on to US military helicopters headed for combat zones and, hopefully, back. On the frontlines, he looked uncannily like Telly Savalas in the movie The Dirty Dozen although, when the helmet came off, Faas had a good head of hair.

He won his first Pulitzer in 1965, accepting the award by saying he had sought “to record the suffering, the emotions and the sacrifices of both Americans and Vietnamese in … this little bloodstained country so far away.” Two years later, he was wounded by a rocket-propelled grenade in South Vietnam’s Central Highlands and was saved from bleeding to death by US medics.

After leaving Saigon in 1970 to become AP’s roving photographer, he won another Pulitzer in 1972, shared with the Frenchman Michel Laurent of the Gamma agency (another Faas protégé, later killed in Vietnam), for pictures of executions in Bangladesh. That same year, he photographed one of thebalaclava-clad Palestinian guerrillas holding Israeli athletes hostage at the Olympic Games in Munich.

Below is a short clip where Faas is talking about some of his remarkable photos.

Information: British Journal of Photography and The Independent