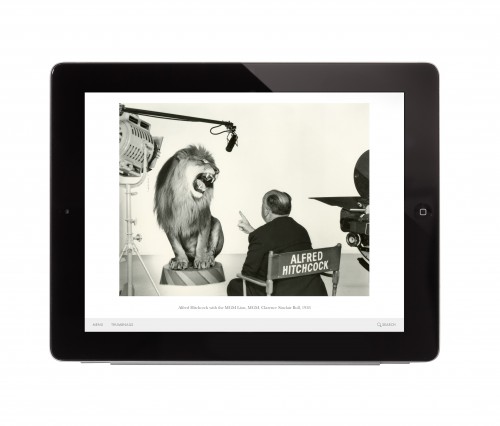 Glamour of the Gods, which was shown last year in a stunning exhibition put on by the National Portrait Gallery and produced by Steidl as a book, has now been translated into a phenomenal iPad app, that complies over 230 stunning images from the extensive John Kobal Foundation. Such photographers work that can be explored includes photographs by: Karl Struss, Don Gillum, George Hommel, Ruth Harriet Lousie, Eugene Robert Richee and many more. Plus two in-depth essays from Robert Dance and John Russell, as well as two intriguing videos; the first is a narrated tour by Simon Crocker looking into the history of John Kobal and how he came to collect all these astounding photographs as well as the relationship he had with the people behind them. The other is a tour of the Glamour of the God’s exhibition at the National Portrait Gallery again with Simon Crocker himself. These videos and essays provide vital information on how Kobal came to preserve these crafted images of Hollywoods Golden age.

‘John Kobal was the first film historian to understand the vital role the photographers played in the creation of hollywood film stars. Using the knowledge he gained as the prolific author or editor of more than 30 books and curator of as many exhibitions, Kobal graduallly shifted his focus away from the personalities of the stars to the photographers themselves.’ – Simon Crocker retrieved from ‘John Kobal and the Hollywood Studio Photographers’

John Kobal was the 20th century’s pre-eminent authority on Hollywood photography, he was also the first collector and later author who systematically sought to understand photography’s important role in creating and marketing the great stars central to Hollywood’s allure. The Glamour of the Gods app displays the photographs as a timeline of the Hollywood portraitures from the industrys golden age, the period from 1920 – 1960. John Kobal was the author of over 30 books on film and film photography, who was known for his creative and exuberant personality, as well as his voracious knowledge of the minutiae of film and photography lore. Kobal has been credited with essentially ‘rediscovering’ the great Hollywood Studio photographers – George Hurrell, Laszlo Willinger, Clarence Sinclair Bull, Ted Allan et al – who were employed by the movie studios to create the glamorous, iconic portraits of the most famous and intriguing stars of the day that now epitomise Hollywood.

Film historian Robert Dance has written about John Kobals important place in Hollywood history and offers a lucid overview of the still and portrait photographers place in the Hollywood studio system. Critic and historian John Russell Taylors introduction draws from his memory of many years of friendship with Kobal. Robert Dance is co-author of Ruth Harriet Louise and Hollywood Glamour Photography (2002, California) and Garbo: Portraits from her Private Collection (2005, Rizzoli).

Due to the success of the touring exhibition of Glamour of the Gods and the publication, now everyone will be able to enjoy the golden age of Hollywood in a simple iPad app. By July this insightful app will be available to purchase from the app store at the price of £4.99 for an abundance of information and beautiful photographs from the John Kobal foundation.