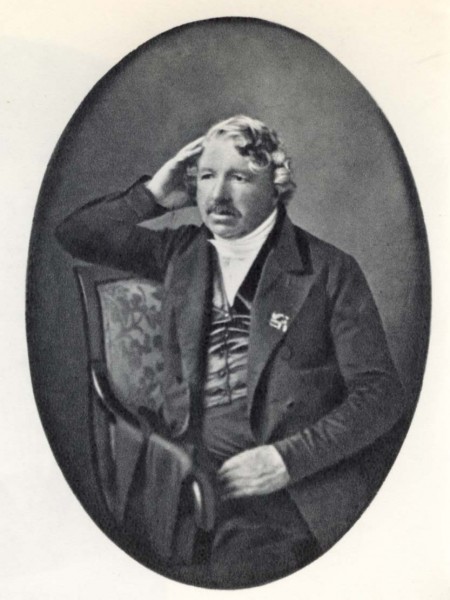 The Daguerreotype process was the first practicable method of obtaining permanent images with a camera. The man who gave his name to the process and perfected the method of producing direct positive images on a silver-coated copper plate was Louis Jacques Mande Daguerre, a French artist and scenic painter. Daguerre had began experimenting with ways of fixing the images formed by the camera obscura around 1824, but in 1829 he entered into partnership with Joseph Nicephore Niepce (1765-1833), a French amateur scientist and inventor who, in 1826, had succeeded in securing a picture of the view from his window by using a a camera obscura and a pewter plate coated with bitumen. Niepce called his picture-making process heliography (“sun drawing”), but although he had managed to produce a permanent image using a camera, the exposure time was around 8 hours long! Niepce later abandoned pewter plates in favour of silver-plated sheets of copper and discovered that the vapour from iodine reacted with the silver coating to produce silver iodide, a light sensitive compound.

After the death of Niepce in 1833, Daguerre continued to experiment with copper plates coated with silver iodide to produce direct positive pictures. Daguerre discovered that the latent image on an exposed plate could be brought out or “developed” with the fumes from warmed mercury. The use of mercury vapour meant that photographic images could be produced in twenty to thirty minutes rather than hours. In 1837, Daguerre found a way of “fixing” the photographic images with a solution of common salt. Two years later, he followed the suggestion of Sir John Herschel (1792-1871) and adopted hyposulphate of soda (now thiosulphate of soda ) as the fixing agent. Daguerre began making successful pictures using his improved process from 1837. On January 9th, 1839, The French Academy of Sciences announced the daguerreotype process. On 19th August,1839, at a meeting in Paris, the Daguerreotype Process was revealed to the world.

In England, Richard Beard (1801-1885), a former coal merchant and patent speculator, bought the patent to Alexander Wolcott’s mirror camera and employed the services of John Frederick Goddard (1795-1866), a chemist, to find a way of reducing exposure times to less than a few minutes, compared to before were exposure times for the earliest daguerreotypes ranged from three to fifteen minutes, which made the process nearly impractical for portraiture, though modifying the sensitization process coupled with the improvement of photographic lenses soon reduced the exposure time to less than a minute. On 23rd March 1841, Richard Beard opened England’s first daguerreotype portrait studio in London’s Regent Street. In June 1841, Beard purchased from Daguerre the patent rights to the daguerreotype process in England.

The daguerreotype is a direct-positive process, creating a highly detailed image on a sheet of copper, plated with a thin coat of silver without the use of a negative. The process required a great amount of care. The silver-plated copper plate had first to be cleaned and polished until the surface looked like a mirror. Next, the plate was sensitised in a closed box over iodine until it took on a yellow-rose appearance. The plate, held in a lightproof holder, was then transferred to the camera. After exposure to light, the plate was developed over hot mercury until an image appeared. To fix the image, the plate was immersed in a solution of sodium thiosulfate or salt and then toned with gold chloride (optional). Although daguerreotypes are unique images, they could be copied by redaguerreotyping the original, by lithography or engraving.

These are the stages that one had/s to go through to produce a Daguerreotype:

1. An assistant polishes a silver-coated copper plate with a long buffer until the surface is highly reflective. The highly polished plate is then taken into the darkroom, where it is sensitized with chemicals ( e.g. chloride of iodine, chloride of bromine ).

2. The operator places the sensitized plate into a camera placed on a high shelf. When the sitter is ready the operator removes the camera cover and times the required exposure with a watch.

4. Finally, the finished daguerreotype portrait is covered by a sheet of protective glass and is either mounted in a decorative frame or presented in a leather-bound case and offered to the customer for close inspection. Early daguerreotype portraits were very small and to appreciate the fine detail these customers they had to use a magnifying glass.

Here below in order is how to prepare and make a Daguerreotype.