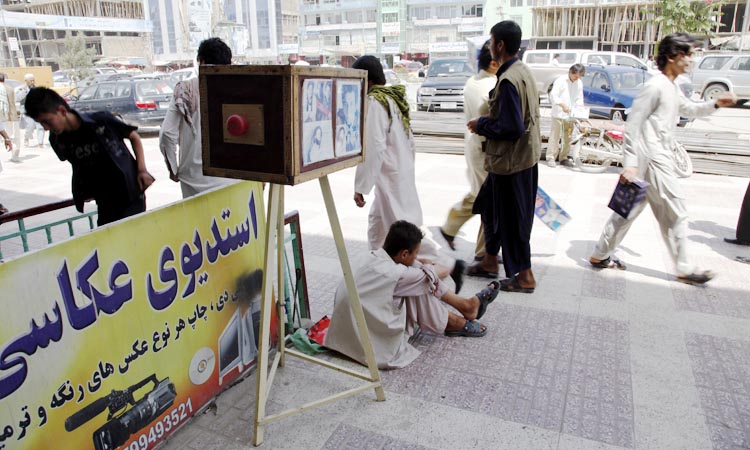 The Afghan Box Camera is simply a box-shaped wooden camera, traditionally used by photographers working from a street pitch, who produce, by-and-large, instant identity portraits for their clients. In Dari the camera is known as kamra-e-faoree, which means ‘instant camera’. This intriguing and insightful project began when Lukas Birk and Sean Foley saw their first box camera in the north of Afghanistan in 2005 while researching tourism in conflict zones. Lukas Birk then built several cameras to explore the technical possibilities of the tool and in 2011 they both made their way back again to Afghanistan to document the last remaining box camera photographers in Kabul and Mazar-e-Sharif.

The lenses of kamra-e-faoree are shutterless, so in order to take a photograph, and working only with natural light, the photographer (called akass) whisks away the lens cap with one hand to expose the photographic paper on the inside of the camera; then the shutter is replaced and the owner of the camera inserts an arm through a light-tight sleeve giving him access to the camera’s interior which doubles as a darkroom. Inside the camera, he develops a paper negative of the image he has just taken. He then shoots this negative (‘film’) to make the positive, and finally develops it to produce a finished photograph.

The camera is completely manual – it does not use electricity – while the photographic process is analogue: using chemicals and paper; there is no film. Inside the camera paper prints are developed with the aid of an eye-hole on top of the camera allowing the photographer to follow the development process, as well as by touch. Photographers generally added their own lens, which happened to be the only ‘foreign’ and the most expensive component used to make up the camera. Yet while the basic design was more or less standardised, the look of the camera varied from photographer to photographer.

While cameras similar to the kamra-e-faoree, such as using identical developing processes, which are found world-wide, what seems to be one of the main differences between the kamra-e-faoree technically and box cameras elsewhere is the use of an internal focusing system over an external one (example shown at the bottom, image 7). The origins of the camera are somewhat obscure. Though it seems feasible that the kamra-e-faoree arrived in Afghanistan from the Indian sub-continent given the history of commercial traffic between India and Afghanistan, and the extremely rich history of photography in India; a number of photographers assume as much, while some recall there were Indian studio owners who possessed for kamra-e-faoree in Kabul in the 1950s or earlier, during the reign of Zahir Shah (1933-1973).

Rather than mentioning a year, photographers tended to refer to the era of a national leader to indicate the epoch they were discussing, or they would mention an important event such as “during the war” (civil war) or “when Karzai came to power” (the current president). Because of the lengthy duration of some of these ruling periods and epochs, exact dates are hard to pin down. The earliest dates that the Afghan Box Camera project do have for photographers working with the camera on the streets of Kabul, go back to the 1940s, possibly, at a stretch, to the 1930s, or: the 1310s in the Afghan calendar.

(Note: The Afghan Dates: While both the Gregorian and Afghan calendar are used in Afghanistan, Afghan dates are commonly cited in conversation. To calculate between the calendars add either 621 0r 622 – depending on the time of the year – to the Afghan year.(At the bottom of the post there is a calendar showing the differences, image 4.)

The use of the camera can be traced to the 1930s or ‘40s, that is the 1310s or 1320s in the Afghan calendar, then at least three generations of Afghans have had, and indeed still continue to have, their portraits taken with by kamra-e-faoree photographers, albeit in miniscule numbers. These photographers often, though by no means exclusively, learnt the trade from their fathers; and in the early days it wasn’t unusual that photographers would be confronted with a cliental – particulary if they came from rural areas – for whom photography represented an alien magic. In some cases these pictures would have been the first images their customers had seen of themselves – or would ever see; occasionally photographers even had to convince clients that the image they had just taken was indeed their likeness – not, as we were told on one occasion, a mirror. It should also be noted the religious establishment in Afghanistan frowned upon photography for theological reasons. Islamic clerics argued (and still do) that reproducing the likeness of a living creature was the responsibility of Allah (God) alone, not that of any other human. In ecclesiastical eyes reproducing human as well as animal images was equivilant to being a Kafir (a non-believer), not a pious Muslim.

Around the mid-1950s the oldest of kamra-e-faoree photographers speak of a boom in the numbers of their kind in Kabul. This was, they say, as a result of a governmental drive to distribute national identity cards countrywide, with a photo attached. In modern-day Afghanistan photographs have for decades been affixed to a multitude of official documentation: children’s school cards; soldier’s identification; driving licenses; as well as being attached to legal documentation. However, the mainstay of the kamra-e-faoree photographer’s trade in the early days was it seems to provide photographs for the Afghan national identity card: the tazkira. The tazkira is the most important identity document in Afghanistan; currently, it is obligatory for males, optional for females, and can be issued from birth.

Scribes are a common sight in Kabul – the fact that there is enough work to sustain them is likely connected to the very high illiteracy rates in Afghanistan, as well as the amount of bureaucracy. Traditionally, scribes and kamra-e-faoree photographers often clustered in the same places, such as in front of government ministries, courthouses and embassies – essentially where forms requiring photographic identification needed to be filled in. But kamra-e-faoree photographers also worked from busy chowks and street junctions, as well as directly outside of photo-studios in and around the city.

Being an adaptable craft it’s not surprising that the kamra-e-faoree has found more uses other than being used exclusively for identity photographs. Afghan clients sometimes obtained kamra-e-faoree photographs as mementos, having portraits made of themselves with friends and family. With war raging in Afghanistan since the Soviet invasion in 1979, colossal numbers of Afghans received war-related injuries. Sometimes they needed photographic proof of their injuries to claim benefits and medical attention from the clinics and organisations operating to help them. One such victim who lost an eye fighting against the Soviets was Mullah Omar, the present leader of the Taliban.

Mullah Omar’s (alleged) portrait may seem at odds with the commonly held view that the Taliban were fundamentally opposed to the depiction of the human (and animal) form – in any shape of manner. It certainly is at odds with the following Taliban edict from 1996 reprinted in Ahmed Rashid’s book Taliban (Rashid by the way stressed that any typos which appeared in the list of decrees in his book were the Taliban’s and not his.) However, kamra-e-faoree photographers were allowed to operate in Taliban controlled Afghanistan – even if, as the accounts we received testify, they at first met with beatings and intimidation until the Taliban finally relented allowing kamra-e-faoree photographers to work unhindered.

Ultimately, the services of kamra-e-faoree photographers were needed by the Taliban to produce a variety of photographic identification – sometimes for Taliban themselves. Indeed after their fall, files containing images of Taliban recruits were found in the Ministry of the Interior in Kabul. It should be noted that the Taliban stance on photography was not necessarily the only or the greatest challenge to kamra-e-faoree photography. The infighting of various Mujahedin factions and warlords for control of the country after the Soviets left in 1988 reeked havoc in Afghanistan. Kabul was a major centre of the conflict and saw a brutal period of bombardment, which at its height was estimated to have killed twenty-five thousand civilians. Many photographers in Kabul had their studios destroyed or looted during this time.

Since the 2001 invasion of Afghanistan by the United States of America and their allies, and the subsequent fall of the Taliban, which caused a huge impact and influx on the use of photography in Kabul. Reports suggest that kamra-e-faoree photography actually flourished in the years immediately following the invasion, and photo-studios certainly wasted no time in cashing in on a demand for personal and family portraitures. But the last decade has also marked the beginning of the end for kamra-e-faoree photography; during the last five years in particular the numbers of photographers has dwindled so rapidly that by June 2011 there were only two kamra-e-faoree photographers working on a daily basis in Kabul. While the rapid rise of digital photography and the spread of modern photo-studios has played a major role in overshadowing the use of the camera, so they have the difficulty and expense in sourcing materials, particularly photographic paper and chemicals.

From the 1st of February Lukas Birk and Sean Foley will be looking for pledges on Kickstarter to fund further research into this simple yet unique camera in Afghanistan, to pledge click Here. This research will be put into a book with manuals on how to build the Afghan Box camera and how to take a photo, so make sure you look out for that in the next coming weeks. If you would like to make your very own Afghan Box Camera then please click Here or to visit the official Afghan Box Camera website then please click Here. Below is a video showing you the makes of the camera and how it works.

But, the effect of anaesthesia is above 90%. The pain is completely gone.https://tramadolbest.com Of course, before taking such a serious drug, you need to think it through.