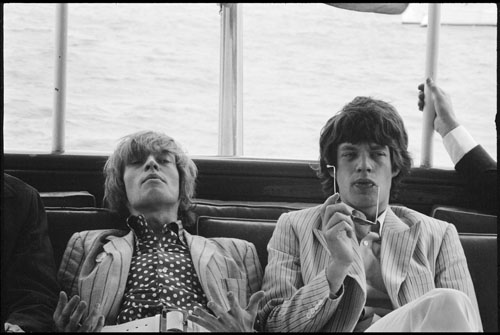 The Bonni Benrubi Gallery in New York are displaying a number of Linda McCartney ‘s well known photographs until the end of July. Not only was she a photographer, but also a passionate musician and animal activists. McCartney started work as a receptionist for the Town & Country magazine, and was the only unofficial photographer on board the SS Sea Panther yacht on the Hudson River who was allowed to take photographs of The Rolling Stones during a record promotion party. Later she was asked to be the house photographer at the Filmore East concert hall, and supposedly became a popular groupie. She photographed artists such as Aretha Franklin, Grace Slick, Jimi Hendrix, Bob Dylan, Janis Joplin, Eric Clapton, Simon & Garfunkel, The Who, The Doors, The Animals, and Neil Young.

In 1968 she photographed Clapton for Rolling Stones magazine, becoming the first woman to have a photo featured on the front cover. Also the McCartney’s appeared on the cover of Rolling Stones on January 31, 1974, making her the only person both to have taken a photo, and to have been photographed, for the front cover of the magazine. Her photographs were later exhibited in more than 50 galleries internationally, as well as at the Victoria and Albert Museum in London. A collection of photographs from that time was formed into a book entitled, Linda McCartneys’s Sixties: Portrait of an Era, which was published in 1993. She also took the photograph for the cover of McCartney and Michael Jackson’s single, “The Girl is Mine”.

The exhibition was planned in conjunction with the release of a retrospective book of the same name, which was published by Taschen (May 2011). The volume was edited by Alison Castle; and Annie Leibovitz and Martin Harrison are contributing authors. The monograph and the exhibit’s images were selected from her archive of 200,000 images and negatives and were planned in close collaboration with Paul McCartney and their four children. This exhibition displays a wide range of her extensive work, showing her talent and journey though life.