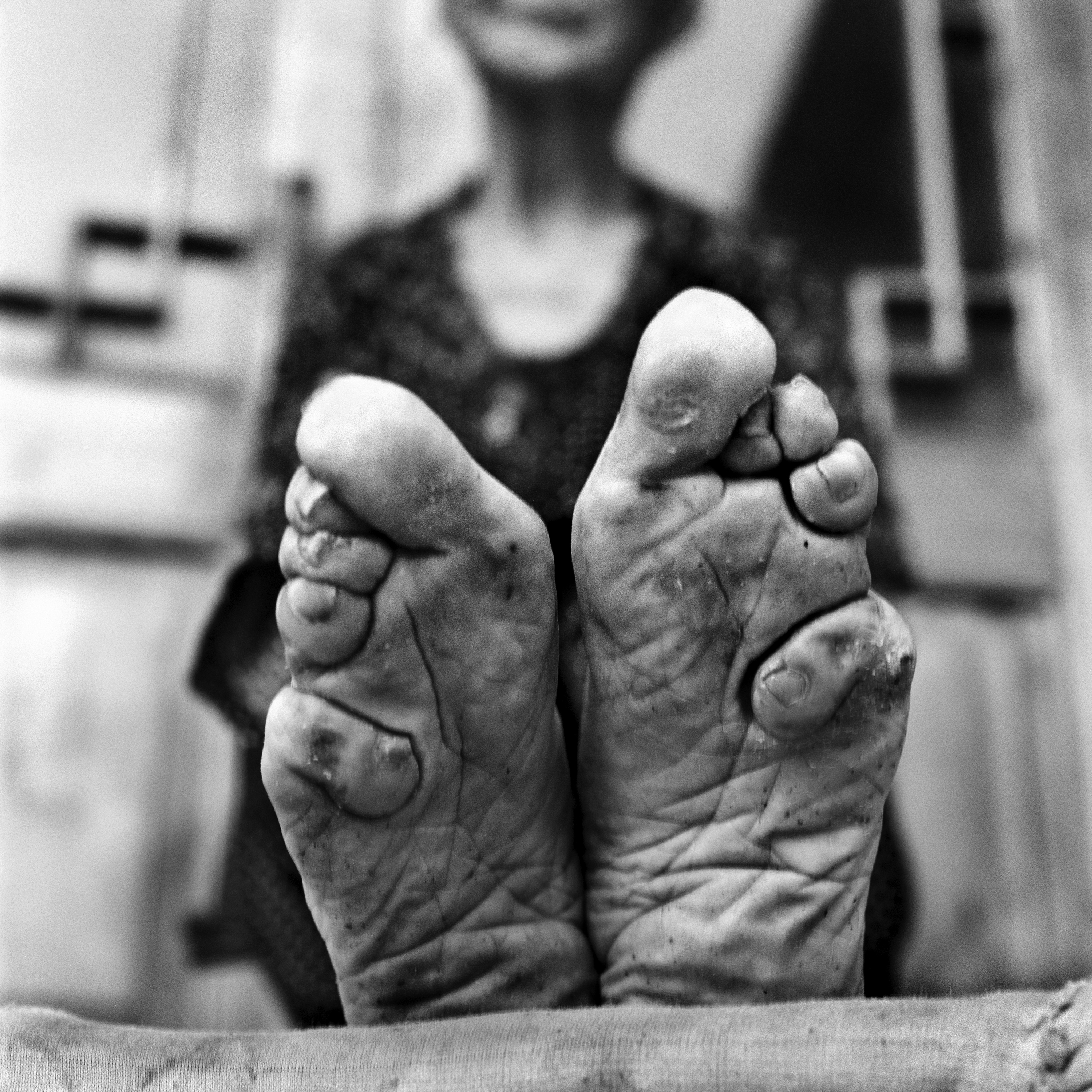 The old saying ‘pain is beauty’ really does come into context when you look through the beautiful yet thought provoking work of English photographer Jo Farrell. Living History: Bound Feet, which Farrell has been working on for the past 8 years, gives us an in-depth look into some of the last remaining women in rural China who’ve had their feet bound. Farrell has managed to photograph and interview over 50 women in different areas of China while documenting them all on a Hasselblad 503C with Ilford film.

Foot binding (“Lotus feet”) became the custom of applying painfully tight binding to the feet of young girls starting at just the age of 4-9 to prevent further growth. Originated among upper-class court dancers during the Five Dynasties and Ten Kingdoms period in Imperial China (10th or 11th century), but spread in the Song Dynasty and eventually became common among all but the lower classes. It became popular as a means of displaying status (women from wealthy families who did not need them to work could afford to have their feet bound) and it was adopted as a symbol of beauty in Chinese culture.

Yet Farrell has documented the women from peasant farming backgrounds that have worked in the fields most of their lives, exposing that this brutal tradition did filter down into ‘lower class’ areas. Not only does it study the tradition but celebrates the lives of these brave women.  In June this year Farrell successfully completed her Kickstarter Campaign to help her finish documenting these women and use the proceeds to create the many interviews and photographs into a coffee table book!

Farrell went onto explain to us a bit more about the project and how it all come about:

Film’s not Dead: Could you explain to us a bit about why you decided to document these women and how you managed to gain access to them?

Jo Farrell: I have always been interested in traditions and cultures that are dying out. In 2006, I decided to focus more on women’s traditions and my first thought was Bound Feet Women in China. I have been in and out of Asia for the past 20-years and have a deep fascination and love of the culture here. I have many books on China, starting with the books: Wild Swans and Life & Death in Shanghai which introduced me to foot binding. I assumed there were few women left alive who had bound feet and started asking my contacts in mainland China if they knew. I eventually came across a driver who said his grandmother had bound feet – she became the first women in the project. Since then it has been through word and mouth that I have discovered more women.

Film’s not Dead: Out of the many women you’ve documented which photograph/moment would you say stood out to you the most and why?

Jo Farrell: They are some of the most joyful and generous people that I have ever met, I have been extemely fortunate to hear their stories and photograph them. These are women from peasant farming backgrounds that have worked in the fields most of their lives. I am honoured to be invited into their homes and drink tea with them. Most of the women I see on an annual basis and those moments are truly wonderful, therefore it’s difficult to pinpoint a specific moment. Although one poignant thing that happened was when I was introduced to my translator (a local English teacher) and explained to her the project. She completely understood that this was more of an academic or anthropological study than mere tourist snapshots; and that my aim was to capture the lives of these incredible women. It turned out that her grandmother also had bound feet but she had never asked her about them or seen them. I included her grandmother in the project and my translator thanked me for giving her the opportunity to find out more about the practice and opened up conversations between herself and her grandmother. To me this speaks for her generation, that bound feet are not talked about even within the confines of a family unit and that before long it will be too late to ask.

Film’s not Dead: You’ve been photographing these women for the last eight years, the photographs are truly gripping. What are you hoping to come out of this project?

Jo Farrell: This project celebrates the lives of incredible women who have suffered through famine, the cultural revolution as well as foot binding. In their old age they have become the forgotten women of China. I want the world to look beyond the feet at the actual women they are, and the lives they have led. That this is a record for future generations to come. I am producing a book for the financial contributors of this project and I am hoping that a mainstream publisher will pick it up. It would be great to have a major exhibition of my silver gelatin prints.

Film’s not Dead: You’ve mentioned you used a Hasselblad 503C with Ilford Film. Why did you decide to capture this project using this camera?

Jo Farrell: The moment I picked up a Hasselblad I fell in love it. The images I can produce with it have so much depth. I think analogue photography is an art form, with only 12 frames on a roll you have to be precise in every aspect. This extends to the printing of silver gelatin prints in the darkroom, where the process of creating a fine art print is such a rewarding experience. You are bringing life into your work. All my photographs are printed full-frame showing the black negative borders, I don’t believe in cropping after the fact, it should be done in camera. I also think that using a Hasselblad 503C is very apt for photographing traditions and cultures that are dying out as the majority of professional photographers are turning to digital now. I have an understanding with Ilford film and photography paper, through experience I know what works and what does not, I don’t need to mess around with trial and error and am extremely happy with the results. Using film does bring it’s complications, on my next trip to China I will be carrying over a 100 rolls of film and will have to negogiate security guards and scanning machines. I am also very protective of my film bag and feel more relaxed when I have returned to my studio ready to process.

Film’s not Dead: What have you learnt from this project and what will you take away from it?

Jo Farrell: One of the main things that I have learned is that it is so important to focus on a specific project. That your dedication and passion for it will show. It is important to immerse yourself in it and learn the history behind your subject. It becomes part of you and you will never leave it behind, it defines you.