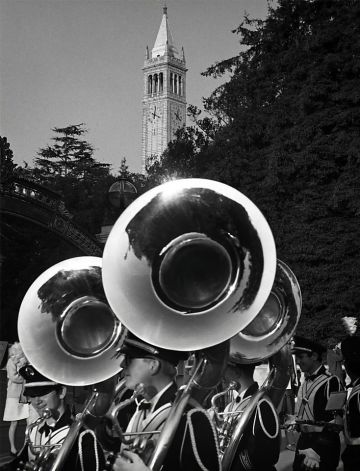 A significant and rare collection of signed prints by American photographer and environmentalist Ansel Adams have been discovered in one of the United States fourth largest libraries, where they were found just casually sitting in a box. These remarkable images where shot nearly 50 years, ago showing the University of California campuses, creating a vast repository of 1960s photographs that was named “Fiat Lux” (“Let there be light”), after the university’s motto.

In 1964, the University of California President Clark Kerr hired Ansel Adams to photograph the UC system. Kerr had pictured in his mind an elegant and oversized table book to celebrate the centennial of the university, in ’68. What he did not have in mind was that Gov. Ronald Reagan would fire him before the celebration could begin. The book still carried on but unfortunately came and went quietly. If it wasn’t for a theater and dance professor named Catherine Cole who had been nosing through documents that have nothing to do with her then they might not have been found.

“I kept seeing the name Ansel Adams and thought ‘what the heck is he doing all over the UC archives,” says Cole, who followed this lead to the Bancroft Library, where 605 signed fine prints by Adams sat in a box, among the university’s rare collections. Cole got those pictures out of the box and onto a wall and now 50 of the prints are on display at the Bancroft Library Gallery, UC Berkeley.

Most of these rare vintage prints have not been exhibited before, other than a touring show organized by UC Irvine in 1991. This unique collection of an iconic photographers work is definitely worth a stop, even though there’s not a ‘typical’ Ansel Adam’s landscape they defiantly convey his precise exposures and accurate compositions. If you went to any other UC campus their is another reason to see them as Adams covered all nine campuses, including UC Santa Cruz when there wash’t much of it.

“This is an extraordinary resource that has been buried like a time capsule,” says Cole, 49, who discovered the prints while doing independent research on the California Master Plan for Higher Education. “I really felt frustrated that at the current moment there aren’t horizons, at the university. There isn’t long-range vision.”

So if you’re in the Berkeley area, you should try to stop by the Bancroft Library Gallery, where you will be able to see 50 rare beautiful photographs by an acclaimed photographer, which are now on display for free public viewing!