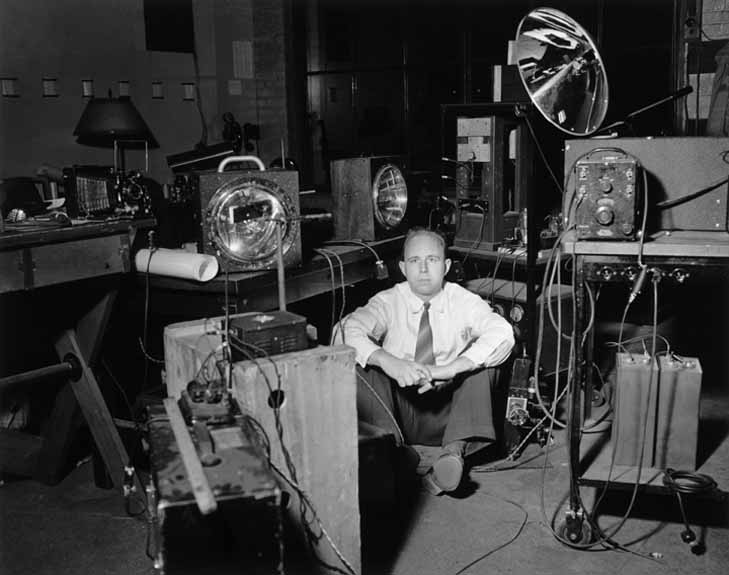 “Don’t make me out to be an artist. I am an engineer. I am after the facts, only the facts”

Harold Eugene “Doc” Edgerton ‘the man who made time stand still’, is a legendary photographer, known for inventing the strobe flash in the 1930s, that brought a whole new shocking way to take photographs, revealing one action in each minute stage. Not only was he a pioneer in  photography, he was also a pioneer in Science, a professor and an engineer. Not only did he invent the strobe but he managed to make an underwater strobe camera and a sound system that pentrated sonar-and echo sounds, he called a “pinger” – that emitted sound waves to the ocean floor, this allowed him to see with sound.

Edgerton’s  interest in photography was sparked  through his uncle, Ralph Edgerton, a studio photographer. His uncle taught Edgerton  how to take, develop, and print pictures. He worked summers during high school at the Nebraska Power and Light Company. From sweeping floors to repairing downed lines, Edgerton liked his work because, he said, it was “a tremendous challenge (with) all kinds of things happening every day.” In 1925 he received his Bachelor of Science in Electrical Engineering, after that he accepted a one-year research position at General Electric in Schenectady, New York. Later he recalled that it was while he was at GE, studying the large electric motors used for electricity generation, that he saw a strobe for the first time.

One of the most famous early uses of the stroboscope was in a lawsuit between the Lever Brothers and Procter & Gamble on their competitive methods of making soap powder. High-speed, stroboscopic motion pictures provided visual proof that Lever Brothers’ methods were different from Procter & Gamble’s and the suit was dropped. Edgerton’s photographs of actions started to capture the imagination of news photographers. In particular one photojournalist called George Woodruff, who worked closely with Edgerton. Woodruff helped to get the strobe accepted as an essential piece of the photojournalist’s camera kit. In 1940s a photo was taken with Edgerton’s strobe during a track meet, photographers and the public were astonished. Speedray photographs were their nickname and from that moment it unfolded a new era in sports photography.

In 1937 one of Edgerton’s most iconic photographs, entitled ‘Coronet’, was included in the Museum of Modern Art’s first photography exhibition. In that same year, he began designing studio strobes for Gjon Mili, who became a well-known photographer for Life magazine. At the request of Kodak, Edgerton set up a booth at the 1939 World’s Fair in New York City, integrated with a baseball-shooting cannon that allowed visitors to take their own strobe pictures. In 1939, Edgerton also published Flash! Seeing the Unseen by Ultra-High-Speed Photography, a collection of his wonderful photographs, that became a bestseller. Then, in 1940, MGM invited Edgerton to make a stroboscopic high-speed motion picture with comedian Pete Smith. The ten-minute short, Quicker ’n a Wink, won an Oscar.

I think everyone can agree that this man was a true genius, who lived his life to his full potential, creating not only incredible images that people didn’t think were possible, but he taught people, he built and he broke boundaries; another quote of his is that “Work hard… tell everyone everything you know… have fun.”. He rose to any challenge thrown at him with his usual attitude of “let’s invent a way to do it”!If you would like to find out more about ‘Doc’ Edgerton visit The Edgerton Digital Collections project, there is great information about him and some fascinating videos.