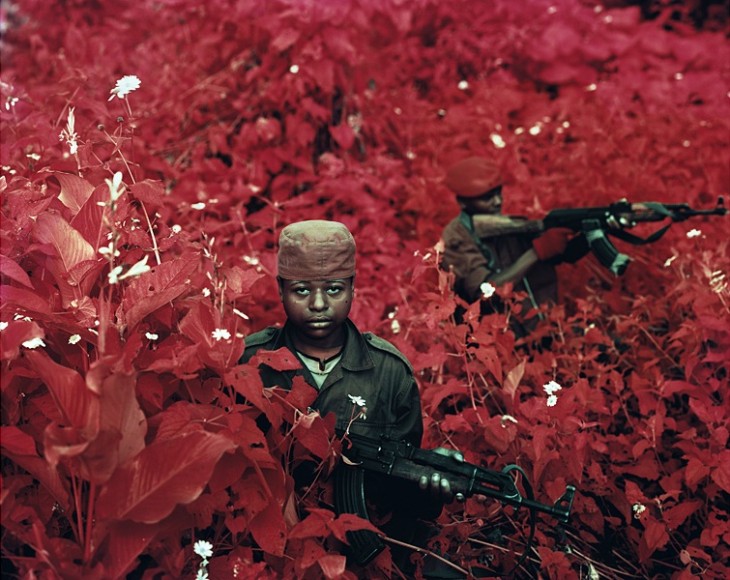 “I chose Aerochrome because I thought that it would provide me a unique window through which I could inspect the eastern Congo battlefield. That film gave me the opportunity to think about from my role as a white man photographing Congo with a huge wooden camera. Besides, it made me start to evaluate the photojournalism rules in my task of representing conflicts, and that I’ve wanted to face up in my own way”

These impressive dream like photographs were taken by the Irish photographer Richard Mosse on a large format camera using discontinued military surveillance film, which is used to detect an invisible spectrum of infrared light, warping the hues of green into a landscape of lavender and revealing much more than an image shot on typical film would. These striking pictures were taken between 2010 and 2011 in Ituri, northern Kivu and southern Kivu provinces and all of them located at Democratic Republic of the Congo eastern part . As you can see from the vivid and truly mesmerising effect, that Mosse has used nothing but Kodak Aerochrome film, allowing him to create these rich pools of colour.

Mosse’s photographs document a land of destruction, shifting politics, systematic massacres, and unrelenting physical and sexual violence. They combine the mixture of red, pink and lavender tones that almost form a metaphor for the harsh reality of the Congo conflict revealing the terrifying events that war can bring . Here below is a short interview he had with Flavorwire in November 2011, about why  he choose the Congo as well as Mosse touching on his experience of shooting on infrared film:

‘I originally chose the Congo because I wished to find a place in the world, and in my own imagination, where every step I took I would be reminded of the limits of my own articulation, of my own inadequate capacity for representation. I wished for this to happen in a place of hard realities whose narratives urgently need telling but cannot be easily described. Congo is just such a place. Its war seems essentially intangible. It is a protracted, complex, and convoluted conflict, fought by rebels with constantly switching allegiance. These narratives, though brutal and tragic, are not tales that are easily told. Across the border, for example, Rwanda’s extraordinary economic development is a testament to the successful international marketing of its terrible genocide. Yet Congo’s conflict, as Jason Stearns [former Coordinator of the United Nations Group of Experts on the Congo] writes, “is a conceptual mess that eludes simple definition, with many interlocking narrative strands. The New York Times… gave Darfur nearly four times the coverage it gave the Congo in 2006, when Congolese were dying of war-related causes at nearly ten times the rate of those in Darfur.’

What has been your experience shooting in Kodak Aerochrome?

‘I felt Aerochrome would provide me with a unique window through which to survey the battlefield of eastern Congo. Realism described in infrared becomes shrouded by the exotic, shifting the gears of Orientalism. The film gave me a way of thinking through my role as a white male photographing Congo with a big wooden camera. By extension, it allowed me to begin to evaluate the rules of photojournalism, which always seem to be thrust upon me in my task of representing conflict, and which I wished to challenge in my own peculiar way.’

Which elements of your photographs are staged and which are spontaneous?

‘None of the work is staged in the grand sense, a la Gregory Crewdson. But if asking someone to pose for a photograph is staging, then perhaps there are a couple of staged photographs. It has been a very spontaneous project, in my mind, in spite of the halting and difficult process of working in the Congo.’