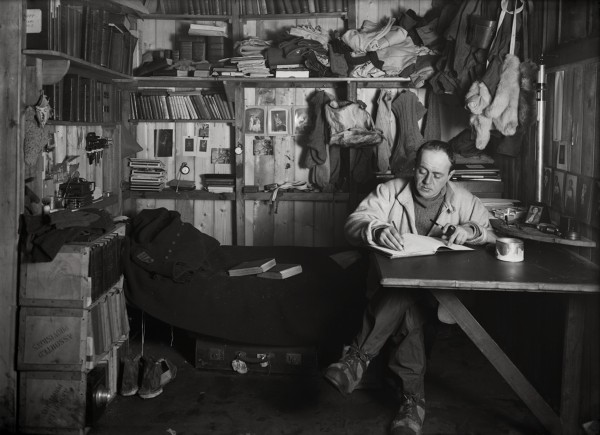 The Photographs of Herbert Pointing and Captain Scott

The ATLAS Gallery, Marylebone, will be unveiling a major collection of rare vintage photographs – the original prints taken from the negatives in 1913 – by Herbert G. Ponting, the official expedition photographer of the infamous British Antarctic “Terra Nova” Expedition to the South Pole, lead by Captain Robert Falcon Scott between 1910–1912.  In total over 50 images by Herbert Ponting and Captain Scott will be on display.

The original 1913 carbon prints will be on display, which are in exceptional condition, have not been exhibited publicly for nearly 100 years, and many remain in their original Edwardian frames! The ATLAS Gallery show is the largest exhibition of Ponting’s original Polar photographic prints assembled since first being displayed at the Fine Art Exhibitions between 1913 and 1915. Herbert G. Ponting (1870-1935) was already one of the most renowned and accomplished photographers of his day when he was recruited as a ‘camera-artist’ to document Scott’s attempt to reach the pole. A highly experienced travel photographer, his photographs of Japan, Burma and China – taken before his journey to Antarctica – are still highly sought after by collectors today.  Among his most collectable and rarest works are his photographs of the Antarctic, taken during the Terra Nova Expedition.

The ATLAS Gallery’s selling exhibition is from the collection of antique photography collector Richard Kossow, who started collecting Ponting’s polar photographs over 25 years ago.  Kossow, a Literary Dealer, had his interest in Ponting’s photography sparked through his research into the diaries and memoirs of the Edwardian Polar explorers.  After finding many of Ponting’s original prints in appalling states of decay, he devoted his collecting towards finding Ponting’s best-preserved original photographs, wherever possible in their original frames.

Ponting’s extraordinary visual record of the Polar regions are considered to be of huge scientific and visual significance. His extraordinary technical and compositional talents captured images of the previously uncharted continent of unparalleled quality, which are still among some of the finest ever taken of the Antarctic. Ponting was the very first professional still and movie photographer to go to a polar region, and was the first movie cameraman to use his camera for naturalist studies.  The photographs are also of considerable artistic note, displaying both the typically painterly compositions indicative to Edwardian photography, but also highly innovative, almost modernist perspectives on the polar landscape, demonstrating Ponting as a creative and pioneering photographer.

The exhibition will also feature the Lost Photographs of Captain Scott, taken by Scott himself during his tragic march to the Pole and first exhibited at the ATLAS Gallery in November 2011. Throughout his polar trek, and in the face extreme arctic weather conditions, Scott – trained by Ponting – captured some breathtaking polar panoramas as well as photographing the explorers themselves, documenting some of the most poignant and emotive records of the fateful expedition. Captain Scott’s ill-fated polar trek remains imprinted in the public consciousness as the venture in which Scott was beaten to the South Pole by the Norwegian Roald Amundsen, only to perish during his return journey, along with four other members of the polar party.

The ATLAS Gallery’s exhibition will mark the centenary of the death of Captain Scott and his men, as well as the National Service of Commemoration in honour of Scott, which will be held at St Paul’s Cathedral, 29 March 2012.