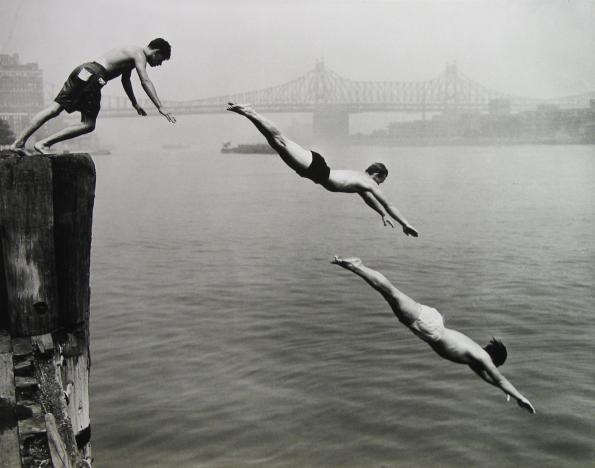 Detailed, emotionally provocative images of every day life documented by New York photographer Arthur Leipzig, particularly known for his photographs of children at play on the streets and piers of mid-20th-century New York City, sadly died last Friday at his home in Sea Cliff, N.Y. at the age of 96.

Born in Brooklyn, New York in 1918, Leipzig’s journey into photography started in 1941 when he registered for a $6 class at New York’s Photo League, with a $3 scholarship and a 9 x 12 Zeiss Ikon. The Photo League, begun in 1936, made up of amateur and professional photographers dedicated to promoting social documentary photography as well as photography as an art form. Leipzig studied with Sid Grossman and Paul Strand and at that time was exposed to seminal figures such as Berenice Abbott and W. Eugene Smith.

It was like duck to water Leipzig’s success in photography was immediate and by 1942 he became a staff photographer for the influential newspaper PM. A liberal publication that used photography in abundance on its pages and allowed its photographers free reign. The PM folded in 1946 after which Leipzig embarked on a freelance career, doing work for such leading newspapers and magazines as LIFE, Fortune, Look and the New York Times.

Acclaimed as a sensitive and impassioned documentary photography, Arthur Leipzig has always directed his camera toward the human condition and his deep love of people. Leipzig’s photographs are sharp and detailed. He shoots in a straightforward fashion, never forcing the moment but rather allowing a human story to transform simply and spontaneously. As a result Leipzig’s photographs depict the human community with great intimacy and dynamic energy.

Leipzig’s distinguished work has been seen in many group and solo shows, beginning with “New Faces” in 1946 at the Museum of Modern Art and later in 1955 in Edward Steichen’s landmark exhibition “The Family of Man.” In 1995 the Museum of the City of New York exhibited “Growing Up in New York: Photo-graphs by Arthur Leipzig.” Leipzig’s photographs are in many important permanent collections including New York’s MoMA, the Brooklyn Museum, the National Portrait Gallery, the Art Institute of Chicago, the International Center of Photography, the Baltimore Museum of Art and Bibliotheque Nationale in Paris.