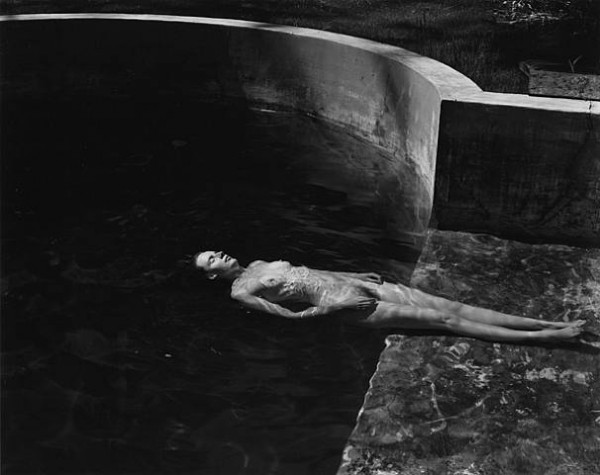 Through the 1920s the primary aesthetic standard of photography was pictorialism, championed by Alfred Stieglizt and others as the highest form of photographic art. That began to change in the early 1920s with a new generation of photographers like Paul Strand and Imogen Cunningham, yet by the end of that decade there was no clear successor to pictorialism as a common visual art form. The historical Group f.64 was formed when photographer William Van Dyke and Ansel Adams decided to organize some of their fellow photographers for the purposes of promoting a common aesthetic principle. Van Dyke was an apprentice to Edward Weston, and in the early 1930s he established a small photography gallery in his home at 683 Brockhurst in Oakland. Entitling the gallery “683′ as our way of thumbing our nose at the New York people who didn’t know us”, a direct reference to Stieglitz and his earlier New York gallery called 291. Van Dyke’s home/gallery became a gathering place for a close circle of photographers who eventually became the core of Group f.64.

The photographers embraced the concept of ‘straight’ photos, emphasizing technically innovative work and using large-format cameras to capture a great depth of field that demanded attention to every aspect of making a photo. In keeping with their pure beliefs, they did not make enlargements, instead they created contact prints — nearly all of the photos they made were created by the photographers’ handmade silver gelatin prints — producing them at the same size and level of detail at which they were photographed.

In 1931 Weston was given an exhibition at the M.H. de Young Memorial Museum in San Francisco, and because of the public’s interest in that show, the seven photographers gathered at Van Dyke’s home and decided to put together a group exhibition of their work. They convinced the director at the de Young Museum to give them the space, and on November the 15th, 1932, the first exhibition of Group f.64 opened to large crowds. A small poster at the exhibition said:

Photo historians generally agree that Group f.64 as an organized faction consisted of the first seven photographers, and the other four photographers are associated with the group by virtue of their visual aesthetic. The group posted a notice in Camera Craft magazine that said “The f.64 group includes in its membership such well known names as Edward Weston, Ansel Adams, Willard Van Dyke, John Paul Edwards, Imogene Cunningham, Consuela Kanaga and several others.” Yet this announcement implied that all of the photographers in the first exhibition were “members” of Group f.64, not all of the individuals considered themselves as such. In an interview with Kanaga she said “I was in that f.64 show with Edward Weston, Imogen Cunningham, Willard Van Dyke and Ansel Adams, but I wasn’t in a group, nor did I belong to anything ever. I wasn’t a belonger.”

There is some difference of opinion about how the group was named. Van Dyke recalled that he first suggested the name “US 256”, which was then the commonly-used Uniform System designation for a very small aperture stop on a camera lens. According to Van Dyke, Adams thought the name would be confusing to the public, and Adams suggested “f.64″, which was a corresponding aperture setting for the focal system that was gaining popularity. However, in an interview in 1975 Holder recalled that he and Van Dyke thought up the name during a ferry ride from Oakland to San Francisco. The term f.64 refers to a small aperture setting on a large format camera, which enables great depth of field, rendering a photograph evenly sharp from foreground to background. Such a small aperture sometimes implies a long exposure and therefore a selection of relatively slow moving or motionless subject matter, such as landscapes and still life. This corresponds to the ideal of straight photography which the group adopted in response to the pictorialist methods that were still in fashion at the time in California (even though they had long since died away in New York). Contemporary photographic convention denotes lens apertures with a slash, such as f/22 or f/64, but in its writings the group always used a dot instead – “f.64”.

In their manifesto displayed at their first exhibition in 1932 the group wrote – ‘The name of this Group is derived from a diaphragm number of the photographic lens. It signifies to a large extent the qualities of clearness and definition of the photographic image which is an important element in the work of members of this Group. The chief object of the Group is to present in frequent shows what it considers the best contemporary photography of the West; in addition to the showing of the work of its members, it will include prints from other photographers who evidence tendencies in their work similar to that of the Group. Group f/64 is not pretending to cover the entire spectrum of photography or to indicate through its selection of members any deprecating opinion of the photographers who are not included in its shows. There are great number of serious workers in photography whose style and technique does not relate to the metier of the Group.

Group f.64 limits its members and invitational names to those workers who are striving to define photography as an art form by simple and direct presentation through purely photographic methods. The Group will show no work at any time that does not conform to its standards of pure photography. Pure photography is defined as possessing no qualities of technique, composition or idea, derivative of any other art form. The production of the “Pictorialist,” on the other hand, indicates a devotion to principles of art which are directly related to painting and the graphic arts.The members of Group f.64 believe that photography, as an art form, must develop along lines defined by the actualities and limitations of the photographic medium, and must always remain independent of ideological conventions of art and aesthetics that are reminiscent of a period and culture antedating the growth of the medium itself. The Group will appreciate information regarding any serious work in photography that has escaped its attention, and is favorable towards establishing itself as a Forum of Modern Photography.’

In 1933 Adams wrote the following for Camera Craft magazine: “My conception of Group f/64 is this: it is an organization of serious photographers without formal ritual of procedure, incorporation, or any of the restrictions of artistic secret societies, Salons, clubs or cliques…The Group was formed as an expression of our desire to define the trend of photography as we conceive it…Our motive is not to impose a school with rigid limitations, or to present our work with belligerent scorn of other view-points, but to indicate what we consider to be reasonable statements of straight photography. Our individual tendencies are encouraged; the Group Exhibits suggest distinctive individual view-points, technical and emotional, achieved without departure from the simplest aspects of straight photographic procedure.”