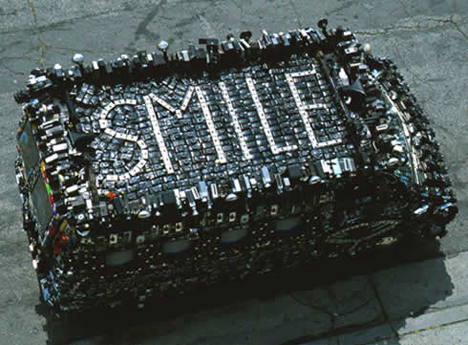 The one off camera van was hand made by Harrod Blank who spent two years covering his van in cameras. He roams the world, snapping sneaky pictures of people who are unaware that they are functional cameras hidden amongst the decorative ones. The van was carefully thought out of how the cameras should be placed, such as the instant cameras act as the front grill, filled with every instant camera ever made. The passenger side is filled with antique collectables cameras and 4 ’32’ inch colour monitors to allow Blank to broadcast on them what he pleases. The two windows have been replaced with two flat screens to show passers by the best images taken on the camera van. The driver’s side has a lovely portrait of a Kodak Instamatic made entirely of Kodak Instamatics! Finally, the roof says the word “SMILE” made, again, entirely of Kodak Instamatics. Blank has written several books about his camera van and has even made a few movies. He has toured the world with it and to this day he still makes public appearances.

The idea of making a Camera Van struck Blank in 1993. It was an actual dream that got him thinking about it. In the dream, he saw a car fitted with cameras everywhere. He then took his car to town. People started staring at his car in disbelief and Blank captured pictures of the people with his hidden cameras. But, the people did not know that the cameras really worked. That’s how he got very natural pictures.

When he woke up the next day and thought he would give it a go. To build the van, he sought help from his friends and by April 1995, Blank took the car outside California and travelled to Houston and since then he has toured many places.