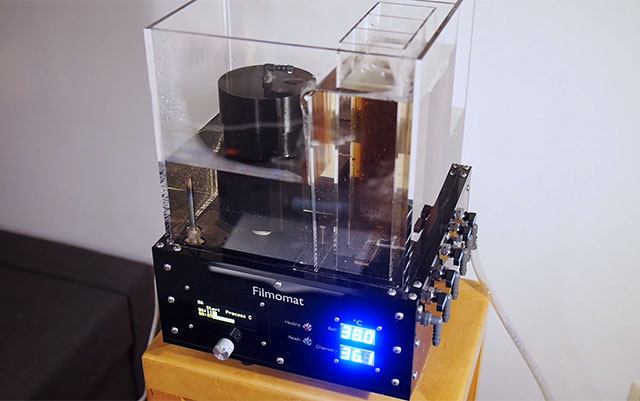 Most of us analogue photographers want an easier way to develop our films but German photographer Lukas Fritz took it into his own hands taking home developing to another level. He calls it the Filmomat which he spent a year designing and building. It’s a fully automatic film processor that can handle everything from B&W 35mm film to 5×7-inch colour slides!

Fritz made a 5-minute video to show exactly how the Filmomat works:

The genius design is capable of holding up to 50 different processes, comprised of three chemicals in a maximum of 10 steps. This includes three chemical chambers, a 6L water reservoir used to both rinse the film between development stages and flush the machine when development is complete.

To get started you simply select the appropriate process for your film and the magic begins.

It heats up the chemicals first to the proper temperatures, pumping the chemicals into the development tank and to agitating the film.

When all is done, you remove your film and hang it up to dry. After the chemicals have been put back in their storage containers using these clever nozzles an automatic cleaning cycle will use the water in the reservoir to ensure no unwanted chemicals are left behind.

Fritz says to Peta Pixel that the Filmomat is roughly the size of a microwave oven and is controlled by ‘a single rotary encoder and a 4×20 OLED-display.’  You can develop two 120 rolls, two 35mm rolls or four sheets of 4×5“/5×7“ film at a time

Fritz says he’s been putting the machine through it’s paces and it’s been holding up well, yet not all is finished. He says there’s much to be tweaked in terms of software and interaction.

If you want to get your hands on one of these machines Fritz says he’s willing to make a few models for those interested, yet you’d have to fork out upwards of $2K (£1,300) for it though.

Thanks for sharing Radu Serbanescu.