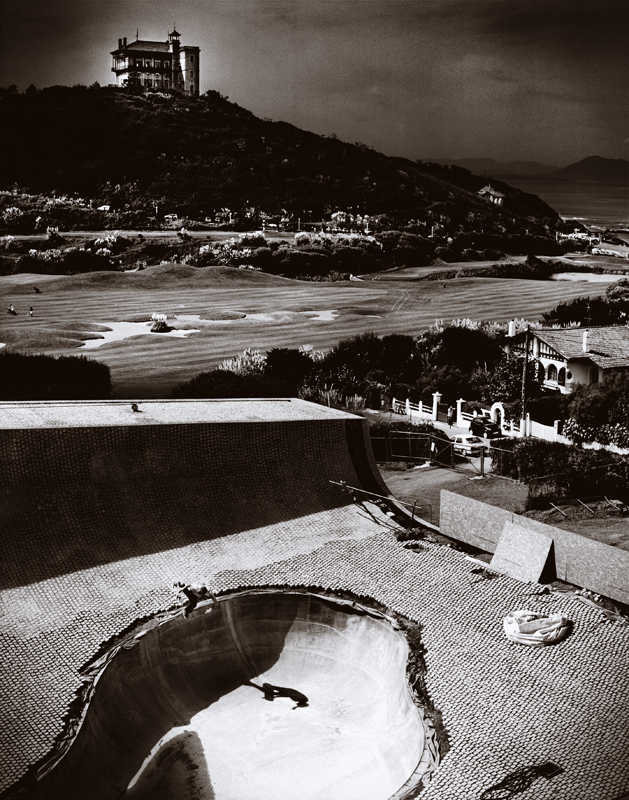 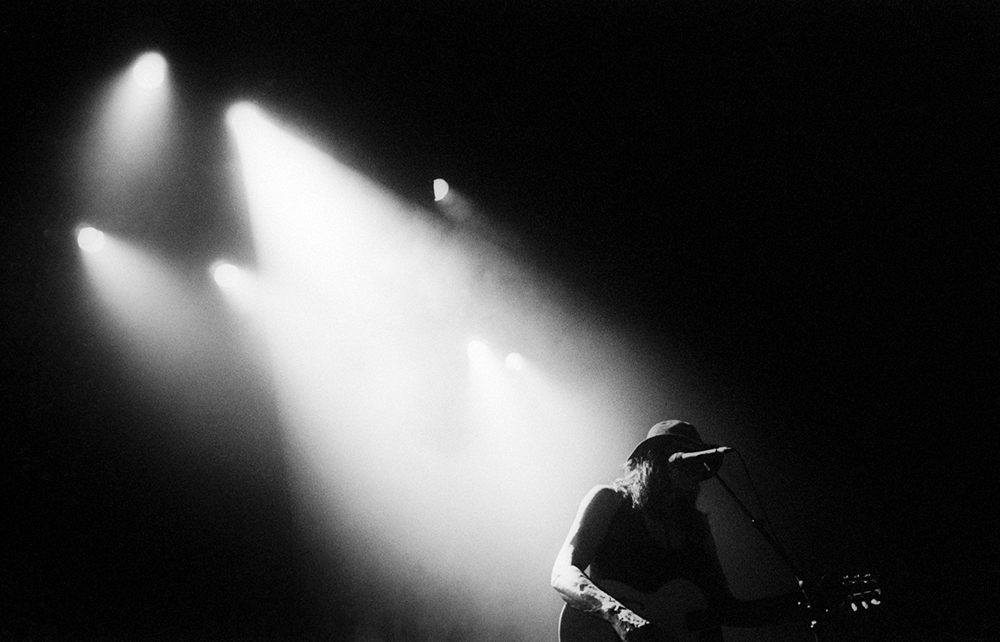 We are delighted to announce after a very tough three months of trying to pick a winner (which was not easy at all) for the Kodak Moment competition we finally announced a few weeks ago our winner as Guillaume Périmony, from Paris, France! The winning image for Périmony was his intriguing photograph of four monks called “Burmese Days”. Here below is our interview with the man behind the winning image and he reveals how that enticingly composed photograph came about:

Film’s not Dead: Firstly we would just like to say congratulations Guillaume on winning ‘The Kodak Moment Competition’! Would you begin by telling us a bit about yourself?

Guillaume Périmony: I’m Guillaume Périmony, I’m 28 years old and I live in Paris. I have been skating since I was a kid, which pretty much brought me to filming and photography. I’m mainly a skate filmer, that’s why I spend a lot of my time on the streets of Paris and of different countries.

Film’s not Dead: Your winning image, “Burmese Days” is so simple yet so beautifully composed. We love it! Could you possibly tell us more about it and how it developed?

Guillaume Périmony: Funny story. I was in Burma to film a skate trip with some pretty good skateboarders. We were filming some skating on stairs in front of that Pagoda that you can see into the picture, right into the sun. We were filming in some really harsh conditions, one local skater has to hold an umbrella over my head to prevent me from burning.

Then, that decisive moment, Cartier-Bresson has been quoted saying happened. Usually I’m not prepared for it, and I see it after it happens. I don’t have the reflex to put out my camera when I see something cool. But this day, the decisive moment was there and I saw it, except I wasn’t ready at all… I at least 30 meters from the scene, holding a video camera…

So I ran to my camera bag, grabbed a compact camera, and ran like crazy man trying not to miss it. While running I also had to prepare the camera, since I used a Olympus XA at that time, which is manual.

Of course, running like an idiot is what made that monk girl look back and smile at me. So yes, she’s pretty much making fun of me in this picture.

Well, the photographer from the skatetrip wasn’t that lucky, since I probably ruined his picture of the scene putting myself between his camera and the girls. 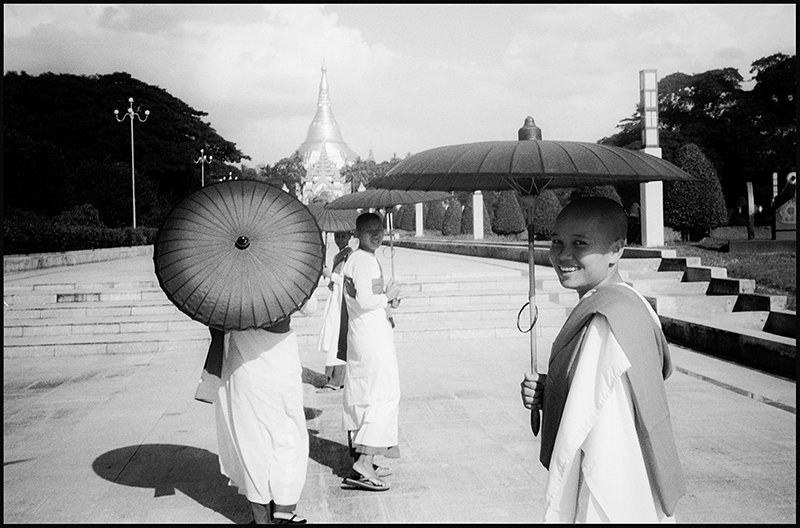 Film’s not Dead: What drew you to photography ?

Guillaume Périmony: As a kid, I drew a lot. I wasn’t that bad but I had a bad memory, and visual memory  plays an important part when drawing. So I think my lack of memory is what drew me to photography, since that was the only way to create for me, it holds something I’d forget without it.

Film’s not Dead: There are many photographers that we are inspirsed by or aspire to be. Who would you say is your all time favourite photographer and why?

Guillaume Périmony: My early favorite photographer was Jean-Loup Sieff. I really like photographs when you can’t say if a picture is prepared or not.

Even if it is, I think it’s legit as much as you can’t say.  It’s pretty bad to say, but I think if you ask yourself if the photographer and the model had sex, it means that the photo works.

Film’s not Dead: Since the beginning of digital photography there has always been a strong and heated debate between the comparison of film and digital. What is the reason why you choose to shoot on film?

Guillaume Périmony: Even if I always preferred the way film looks, I didn’t really choose. I started photography in early 2000’s. I was broke at that moment, and buying a digital camera was just impossible. At that time I think digital was pretty bad, so I feel lucky that I couldn’t afford one!

I just pretty much used my scholarship study to buy my first camera and video camera. I was eating gingerbread at every meal just to save more money for it ! I also quit Art Faculty to film and shoot skateboarding at that time, which was the best decision since it was a much better way to learn. 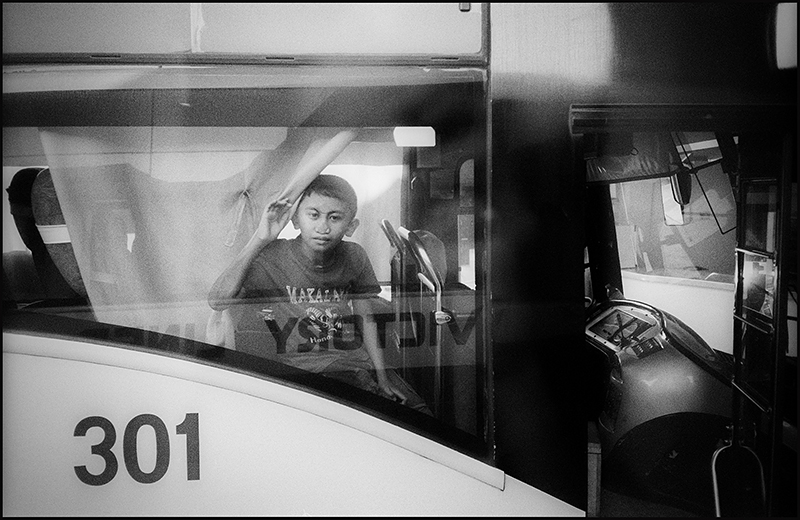 Film’s not Dead: What is the best piece of advice about photography you have ever had?

Guillaume Périmony: I think the best piece of advice I got was from street robbers.

I get my camera bag full of gear stolen in Barcelona. Of course, it was impossible to buy it again. So I had to get back to a more simple setup. And I still feel it was the best thing for me at that moment. Renewing yourself can be really helpful sometimes, and of course, less is more.

Film’s not Dead: Thank you very much for doing this interview with us Guillaume and for submitting your work to our competition. Is there anything else you would like to say to the readers of Film’s not Dead?