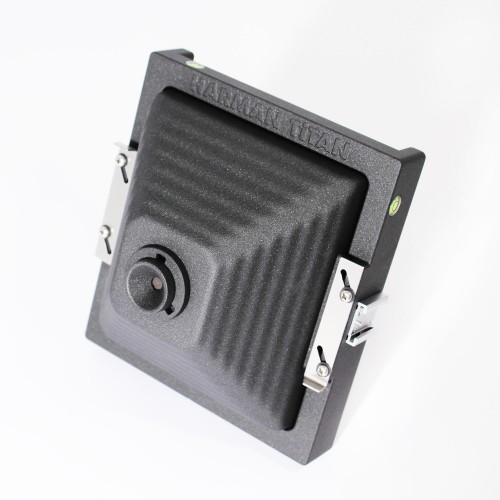 Harman our going to be releasing a new 5×4 pinhole camera on to the analogue market.

This camera has been designed in conjunction with Walker Cameras who are based in Wales and was the first to unveil it at the Focus on Imaging trade show earlier this year. Yet, the concept first came about six months earlier in Germany.

“We were at Photokina last year and had a number of pinhole cameras on our stand to showcase our positive paper,” says Steven Brierley, director of sales and marketing at Harman technology. “There, we had people tell us: ‘You need your own pinhole camera for that paper.’ And Mike Walker was one of them.”

Four months later, Brierley received a call from Walker inviting him to come see the first prototype of what is now known as the Harman Titan Pinhole Camera. “When we took it to Focus, everyone was amazed.” The next step was to test the US market, says Brierley. “I took it with me three months ago to the US and showed it to dealers who told me they would support the project if it came about.”

The camera’s body is made from injection molded ABS finished with a very durable non-slip coating. It can be used with any 5×4 film holder – Harman decided it would be best not to ship the camera with a film holder as “it would have become too expensive, but also because there are so many out there, especially on eBay.” The camera also features tripod mount positions, two built-in spirit levels, and an accessory mount. “The accessory mount won’t necessarily be used for a flash. We’ve found that a lot of people liked to use their iPhone as a digital viewfinder. If there’s demand, we might even build our own, custom-made iPhone holder.”

The first version of Harman’s pinhole camera will be available with a focal length of 72mm – but, depending on its success, they plan to release a 110mm and 150mm version. “We’re also looking to release a pinhole version without any pin hole in them, so that users will be able to create their own pin holes – we found that some users wanted irregular pin holes.”

The camera will come in a kit with a pack of Harman’s Direct Positive photographic paper, as well as 10 sheets of 5×4 Ilford Delta 100 Professional film and a pinhole exposure calculator. The retail for this kit will be at £150 from late October.