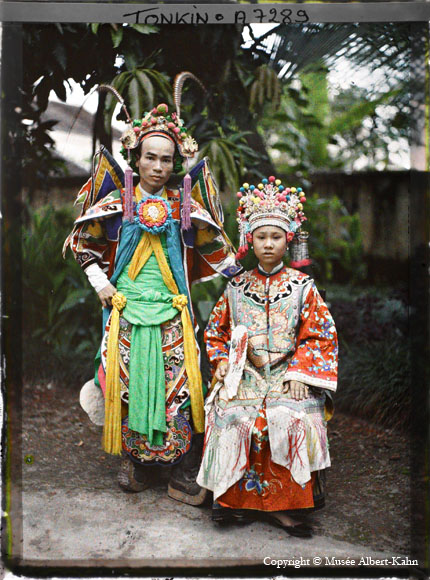 Colour Photographs from the a lost age

In 1909, millionaire French banker and philanthropist Albert Kahn decided to embark on an ambitious photographic project, by using the era’s blossoming photographic technology, the new autochrome – which was the world’s first true colour photographic process, invented by the Lumière brothers in 1903 and marketed in 1907 – in a mission to create a colour photographic record of human life on earth. He aimed to use it to promote peace and an understanding for other cultures from around the world. Kahn believed that photography was a way of documenting the human “tribes” of the world, forming vibrant and colourful photographs of humanity.

Through using his vast fortune he was able to send a group of audacious photographers to more than fifty countries around the world, often at crucial junctures in their history, when very old cultures were on the brink of being changed forever by war and the march of twentieth-century globalisation. They documented in true colour the collapse of both the Austro-Hungarian and Ottoman empires; the last traditional Celtic villages in Ireland, just a few years before they were demolished; and the soldiers of the First World War — in the trenches, and as they cooked their meals and laundered their uniforms behind the lines. These dedicated photographers took the earliest-known colour photographs in countries as far apart as Vietnam and Brazil, Mongolia and Norway, Benin and the United States.

At the start of 1929 Kahn was still one of the richest men in Europe yet later that year the Wall Street Crash reduced his financial empire to rubble and in 1931 he unfortunately was forced to bring his fasinating project to an end. In 1940 Kahn died, but his legacy lived on, since then his collection has been kept at the Musée Albert-Kahn in the grounds of his estate near Paris, and is now considered to be the most important collection of early colour photographs in the world.

Until relatively recently, Kahn’s huge collection of 72,000 autochromes remained relatively unheard of; the vast majority of them were unpublished. Now, a century after he launched his Archives of the Planet project, the BBC Book The Wonderful World of Albert Kahn, and the television series (shown below) it accompanies, was able to bring Kahn’s astonishing pictures to the publics eye for the first time, showing us that an era that was mainly thought of in a monochrome way reveals a vast collection around the world in colour.