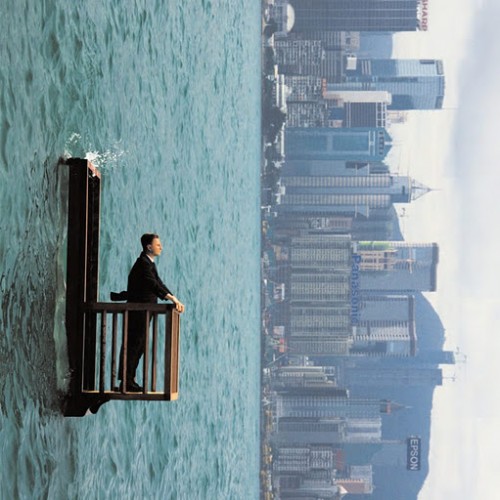 “You see a tension in my hands, my red face is far from serene as the blood rushes to it, my suit is ruffled.”

No, there are no special effects added to these truly magical and mesmerising photographs. French born artist Philippe Ramette believes nothing should ever be faked, as he defies gravity and reality with his surreal compostions that show himself, standing or sitting in awkward angles, creating an upside down world. For Ramette, his images are statements about gravity, weightlessness and man’s relationship to the landscape. He, started out as a sculptor and still sees himself as one, for example, he built his own metal support structures to help hold him in these anti-gravity angles, which he calls “sculpture-structures”.

Phillippe Ramette has been creating and forming objects for over 15 years, which he successfully uses to try to complement to the human body, showing the strain the body can go under to create these dream like images. They are devices or mechanisms that allow him to put himself in strange circumstances, enabling his body to experience positions the body should not endure (structures shown below).

For the series Rational Exploration Of The Undersea, some shown below, he has attached lead weights under his suit and around his ankles to keep him firmly to the sea bed. When Ramette needed air, a diver would swim over with an oxygen tank, but before shooting his team had to wait for the sand and bubbles to settle in order to achieve the effect of stillness. “There I was in a suit on the seabed, weighed down and able to walk underwater as if on land, unaffected by the currents. For me, that was a real pleasure.”

In the video shown below, it shows the construction of the image ‘Balcony 2’, he is standing on a balcony in the middle of Hong Kong harbour, while seemingly managing to levitate above the water. For the shoot, a watertight tank was used as an underwater float for the balcony, put in place by a barge and crane. Ramette then secured his feet on supports, leaned back and clung to the wood. During the initial attempts, he was soaked by waves and had to swim to safety.

Every one of Ramette’s images are the exact reproduction of one of his drawings; sketches that he considers to be film storyboards, reconstructed by his faithful team while he directs the image. He says, “I never question whether it’s going to be complicated.”