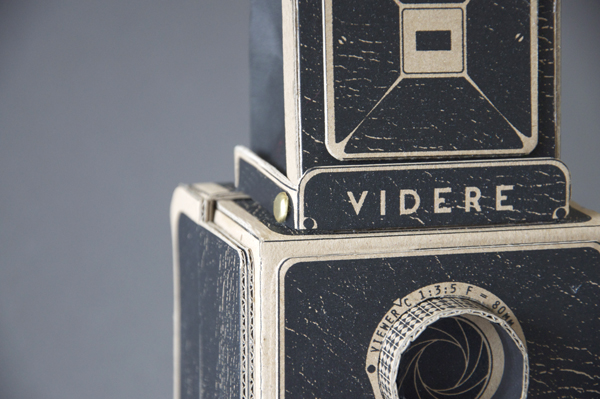 “Make your own medium format camera and learn about pinhole photography in style!” 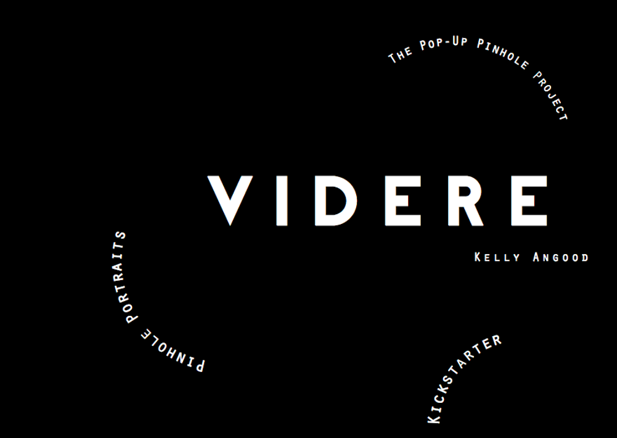 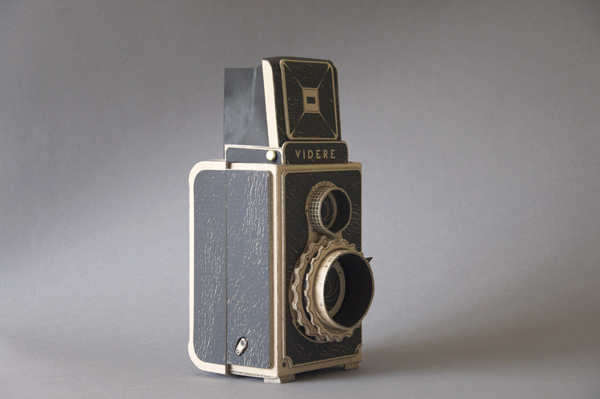 The remarkable DIY Pinhole camera designed by Kelly Angood is back with a whole new layout! About two years ago we wrote a post about Angood who was making her own cardboard pinhole Hasselblad with an attached PDF, so that other people could make it too. Since then the idea has bloomed and turned into a beautifully and simply crafted flat pack camera kit, enabling anyone to make their own sophisticated pinhole. Angood’s idea has created a huge buzz and now her Kickstarter, with over 30 days left has already reached her pledged amount of £15,000. All I can say is, Viva la Pinhole!

Angood says on her Kickstarter: “I’ve come to Kickstarter to help me raise the funds I need to turn my medium format pinhole ‘Videre’ camera into a do-it-yourself, flat pack kit. This project started over two years ago when I created my first pinhole camera. I’d always wanted a ‘real’ medium format camera, but I knew I’d never be able to afford one. So I dealt with it the only way I knew how and made one!”

The estimated delivery date for these brilliant little cameras is set for November, but Angood understands that it is a long time to wait so she has also designed a neat 35mm version of the ‘Videre’ camera (shown below). This will be available as a downloadable PDF for everyone who pledges to receive a camera kit on the 10th July 2013. 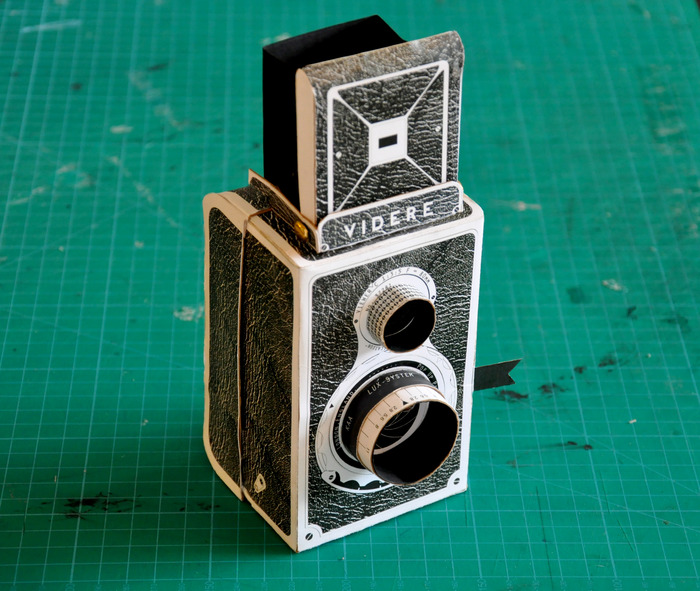 The kit will be printed and die-cut onto thick recycled card and supplied with easy to follow instructions and a spare medium format spool. She also plans to produce a short instructional video, which will be viewable online alongside a virtual gallery space where pinhole photographs that have been taken with the camera can be submitted!

We were lucky enough to be able to talk to Angood about her brilliant idea, how it came about and what her hopes are for the future:

Film’s not Dead: The first time we came across your project was back in 2011 when we fell completely in love with the concept. It has now been nearly two years since, and the idea has transformed into something very special that everyone and anyone can use. Could you explain what has happened since the first cardboard “Hasselblad” pinhole?

Kelly Angood: The main thing thats happened is that I’ve learnt a lot! Turning that original design into a 35mm download and a kit was a challenge, but one that I believe has given me the ability to make an even better camera kit with the Videre.

Film’s not Dead: There has been a phenomenal amount of interest and support for the newly released Kickstarter campaign. We wanted to find out where did the idea for this fantastic camera kit come about?

Kelly Angood: As you know I’d been working with pinhole photography for a long time, and as a community began to build around my previous projects I realised that they deserved a camera they could call their own!

Film’s not Dead: What drew you to analogue photography?

Kelly Angood: To be honest it was that I didn’t know any different for a long time. I use to carry an old 35mm point and shoot around with me as a kid, and that later turned into my trusty OM10. It was only a few years ago that I got a digital SLR, and I spent a lot of time pointlessly trying to figure out how to make it shoot like film!

Film’s not Dead:With this project you have had to over come a fair few obstacles to get to this current Kickstarter, what was the process you undertook to accomplish this camera?

Kelly Angood: I first came to Kickstarter with the idea of launching the original camera I had made as a kit, unfortunately I had to cancel it as I took some advice from my peers and a few legal professionals that I may be liable to have may have legal action taken against me. It wasn’t really something I’d ever considered, but it certainly wasn’t a risk I was prepared to take, so I decided to pull the project.

I was honestly overwhelmed by the support I received through that project- and I really didn’t let anyone down, so I set to work on the new camera, and that new camera was the ‘Videre’. I always planned to make another camera and had a rough design on the back burner, but the cancelation of the original Kickstarter just spurred me on! 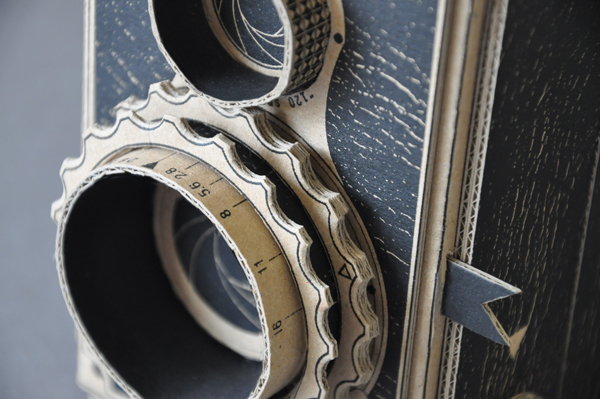 Film’s not Dead: How did the name ‘Videre’ come about?

Kelly Angood: The name was one of the hardest things to make a decision on! It actually means ‘to go on’ or ‘to go further’ in Latin which felt pretty appropriate.

Film’s not Dead: It seems that recently more and more new and unique camera designs for analogue photography are hitting the market. What do you hope to achieve with your camera?

Kelly Angood: For me it’s important that this isn’t just a product that is designed and manufactured, but acts as an enabler too. I plan to make enough to be able to run workshops and teach people about the very fundamentals of photography. I also have some interesting collaborative projects in the pipeline using the camera with a couple of exciting illustrators, designers and photographers.

Film’s not Dead: The design for this sophisticated pinhole camera is beautiful. Would you be able to explain how the camera exactly works and how long it takes to assemble?

The length of time it takes to assemble is probably going to vary- though I’d say you should be ready to shoot within 2-3 hours. I can get one together in about 40 minutes, but I’m probably an exception!

The camera body and film mechanism are separate, and are held together. I designed it this way so that the film can be easily loaded, there is then a wind on knob that slots into the bottom of the mechanism. One full turn moves the frame on and you are ready to shoot. The exposure is made by opening the shutter at the side of the camera. 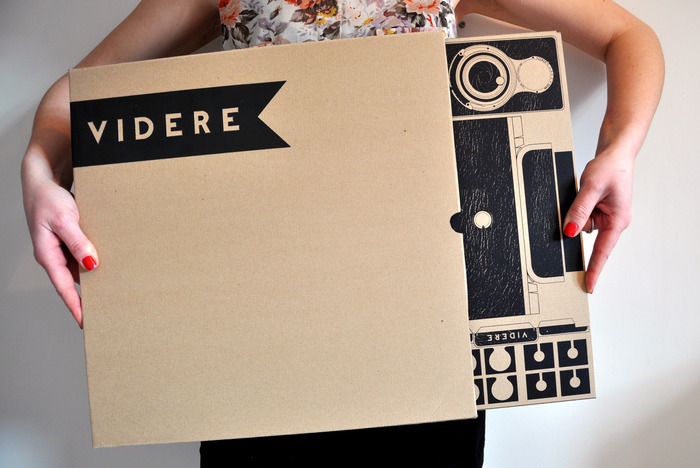 Film’s not Dead: What are your hopes for the future with this project?

Kelly Angood: I’d like to think this project will allow me to work collaboratively with interesting and inspiring people, and teach people about the basics of photography. We live in a hyper-digital world and it’s amazing the amount of people who don’t know about how photographs are made- someone recently asked me on Kickstarter what the resolution of the camera was!

I’d also love to make more cameras and already have a notebook full of potential ideas that I’d love to get a chance to realise.

Film’s not Dead: Thank you very much Kelly for taking the time to do this interview with Film’s not Dead, is there anything else you would like to say to the readers?

Kelly Angood:I’d just like to say thank-you for your support with the project and that you can keep up with it online at www.kickstarterpinholediary.tumblr.com

Here below is a few examples of what this brilliant DIY camera is capable of:

An update from Kelly for her Videre 35mmm is here, this is what it looks like and for her backers there is more details HERE. 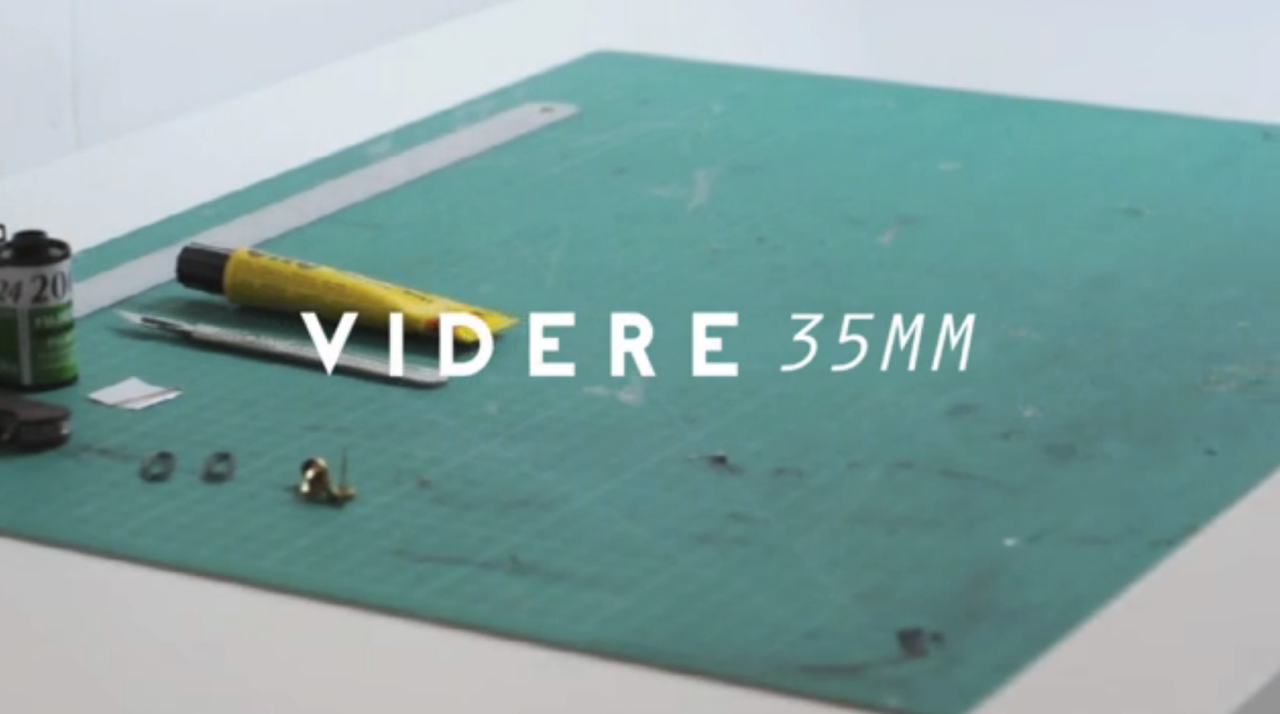 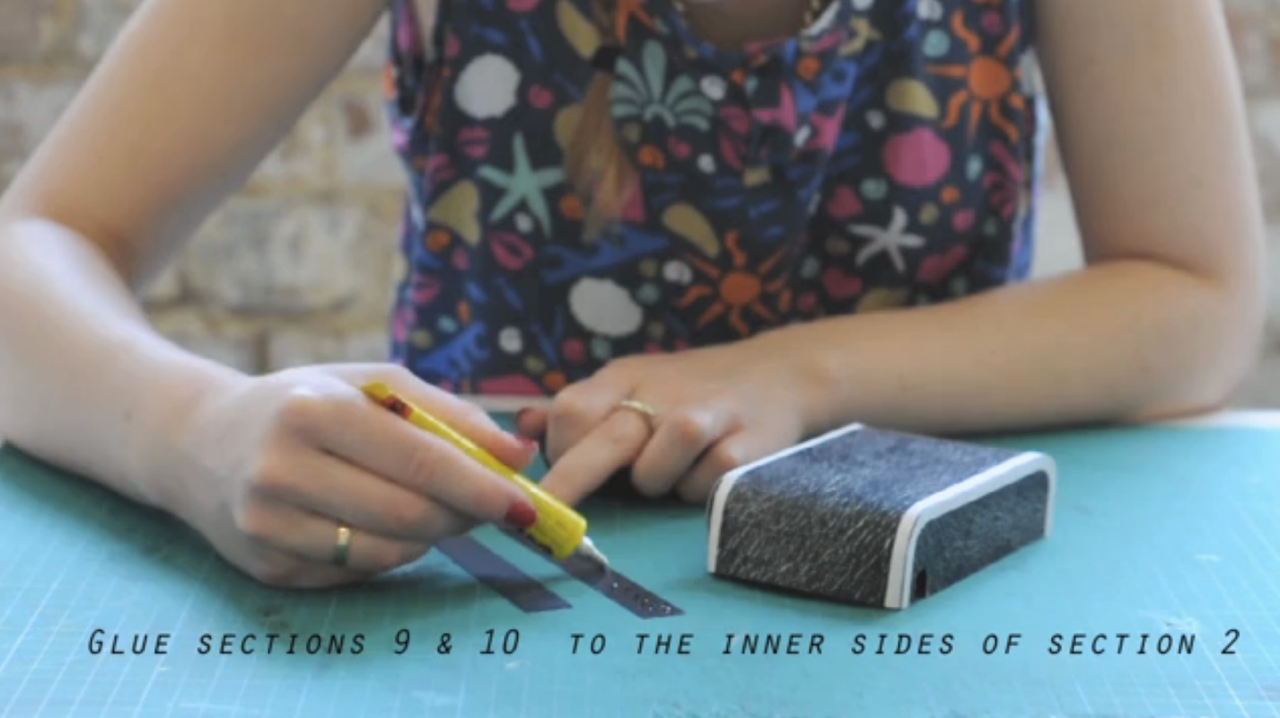 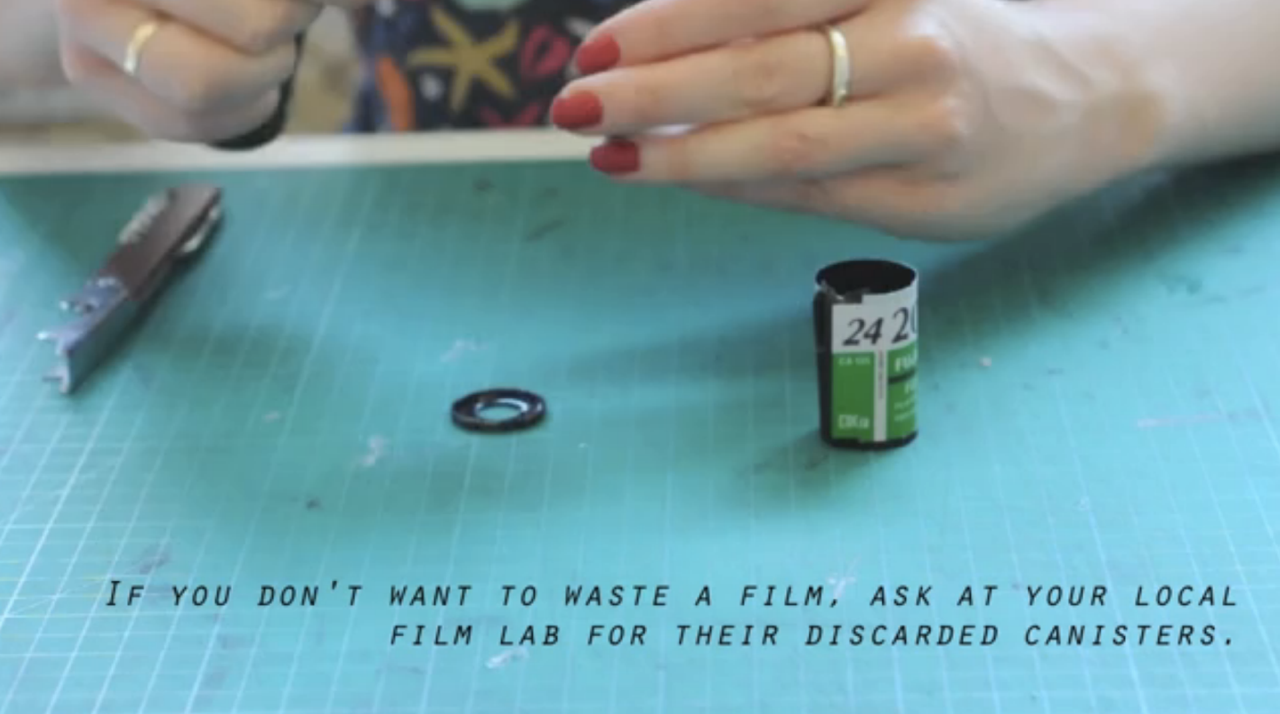 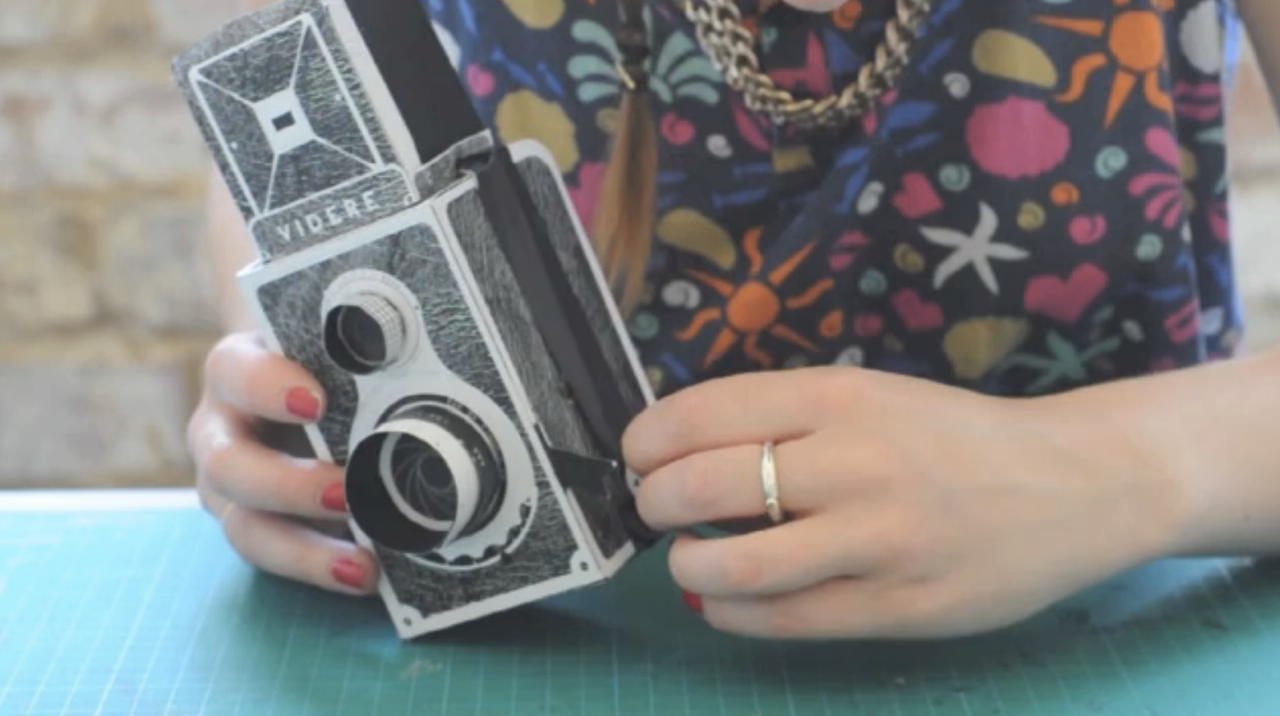