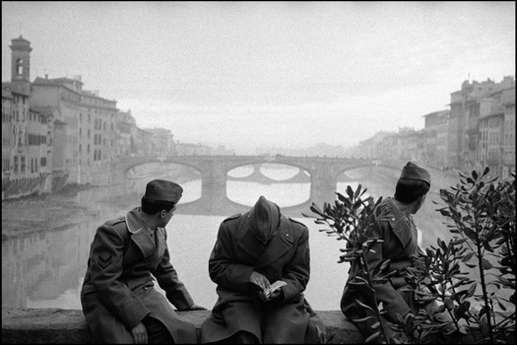 ‘We love Black and White’ is a group exhibition that is showing a range of Black and White photography from a number of photographers, which includes the works of Magnum members Inge Morath, Leonard Freed, and Robert Capa.

Inge Morath
Morath was born in Graz, Austria, in 1923. After she finished studying languages in Berlin, she became a translator, followed by becoming a journalist for the Austrian editor for Heute, an Information Service Branch publication based in Munich. A friend of photographer Ernst Haas, she wrote articles to accompany his photographs and was invited by Robert Capa and Haas to Paris to join the newly founded Magnum agency as an editor. In 1951 she began photographing in London, and she was lucky enough to be able to work as an assist for Henri Cartier-Bresson as a researcher in 1953-54. She eventually became a Magnum member, after working two years as a photographer, in 1955.

Robert Capa
In 1938 the 3rd of December Picture Post introduced ‘The Greatest War Photographer in the World: Robert Capa’ with a spread of 26 photographs that he took during the Spanish Civil War. Born as ‘Andre Friedmann’ to Jewish parents in Budapest in 1913, he studied political science at the Deutsche Hochschule für Politik in Berlin. Yet in 1933 he and his family had to flee Berlin to Paris due to the growing force of a Nazi regime. Through the Alliance Photo he met the journalist and photographer Gerda Taro, who their were both represented by. Together, they invented the ‘famous’ American photographer Robert Capa and began to sell his prints under that name. Through his time as a photographer he was able to meet Pablo Picasso and Ernest Hemingway, and formed friendships with fellow photographers David ‘Chim’ Seymour and Henri Cartier-Bresson. In 1947 Capa founded Magnum Photos with Henri Cartier-Bresson, David Seymour, George Rodger and William Vandivert. On the 25th of May 1954 he was commissioned by Life to photograph in Thai-Binh, Indochina, when he unfortunately stepped on a landmine and was killed. In 1955 the Robert Capa Gold Medal Award was established, which was to reward exceptional professional photographers merit.

Leonard Freed
Freed first discovered his passion for photography in 1953 when he began taking photographs in the Netherlands. In 1954, after journeys through Europe and North Africa, he returned to the USA and studied in Alexei Brodovitch’s ‘design laboratory’. 1958 Freed had moved to Amsterdam, while there he took photographs of the Jewish community. The concern for this community grew, resulting in numerous books and films, which examined the German society and his own Jewish roots. From 1961 onwards  he worked as a freelance photographer, he began to travel widely, shooting many different situations and people. Early in Freed’s career, Edward Steichen, then Director of Photography at the Museum of Modern Art, bought three of his photographs for the museum. Steichen told Freed that he was one of the best three young photographers he had seen and urged him to remain an amateur, as the other two were now doing commercial photography and their work had become uninteresting. ‘Preferably,’ he advised, ‘be a truck driver.’ 1972 he became a Magnum member. The work that made him famous was his coverage of the American civil rights movement, but he also produced major essays on Poland, Asian immigration in England, North Sea oil development, and Spain after Franco. Leonard Freed died in Garrison, New York, on the 30th November 2006.

To find out more and to see the images that will be displayed at this beautiful Black and White exhibition visit the Photography Monika Mohr Galerie website by clicking here. (Keep in mind the website is all in German, for those who don’t speak German.)