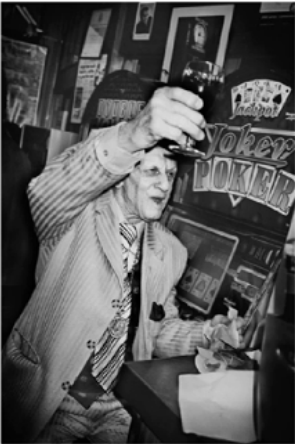 Anders Petersen is a Swedish born photographer, who was commissioned by the Photographers’ Gallery to be part of the summer 2011 Soho Projects. Petersen spent several weeks in London’s Soho. Occupying various bars, cafes, hotels and homes around Soho. Petersen, who is known for his personal and intimate black and white photography, has created a very personal view of the vibrant area of Soho. The photographs that Petersen collects over this time will be curated into a book to be released in 2012.
The Soho Projects is when The Photographers’ Gallery and Bloomberg commission different artists to use the medium of photography to show how they respond to the city, and the area of Soho. This allows the artist to spend time in the area and really get to know it, which allows the artists featured to show the public their personal view and personal experiences in Soho. Below is an interview with Anders Petersen about the Soho Projects filmed in June 2011.