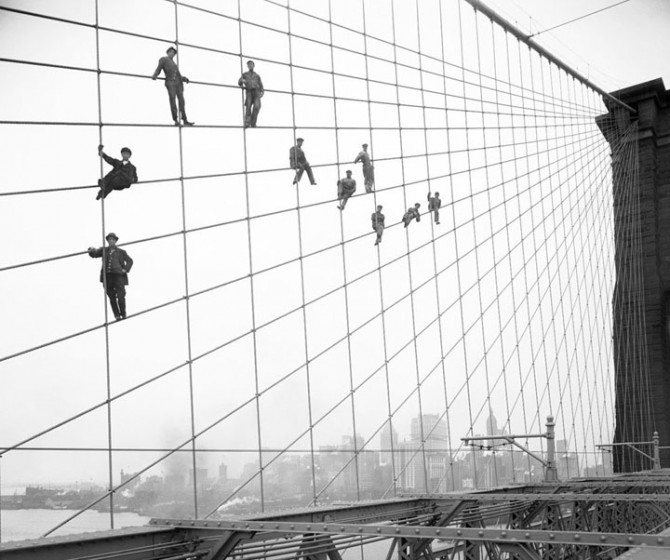 Eugene de Salignac became known as the American photographer who captured the significant rise of New York’s structures. Photographing the creation of the city’s modern infrastructure bridges, major municipal buildings, roads, and subways, forming an incredible archive that until 1999 no one knew who this fantastic photographer was.

Born in Boston in 1861 into an eccentric family of exiled French nobility, de Salignac had no formal training in photography. By 1903, at the age of 42, his brother-in-law found him a job as an assistant to the photographer for the Department of Bridges, Joseph Palmer. After 3 years of apprenticeship, Palmer suddenly died, and in October 1906, de Salignac took over his duties making him the sole photographer of that department.

As the sole photographer from 1906 to 1934 (in 1916 it changed its name to the Department of Plant & Structures), he documented the creation of the city’s modern infrastructure and most notably, he documented the construction of the Manhattan Bridge and the Queensboro Bridge, and the Manhattan Municipal Building. Yet his most iconic image is that of painters posing nonchalantly on the cables of the Brooklyn Bridge (shown below). Using a large-format camera and 8×10 inch glass-plate negatives, he shot over 20,000 images in his career. Most of these negatives and over 15,000 vintage prints are held by the New York City Municipal Archives.

Into his 70s de Salignac was still climbing bridges and actively working, but he was forced to retire in 1934 despite a petition to Mayor La Guardia.

In his lifetime de Salignac’s work was little seen outside of New York City government, and his name was forgotten after his death in 1943. By the 1980s his images were rediscovered, but it was not until 1999 that an archivist Michael Lorenzini, the senior photographer for the New York City Municipal Archives, was digging through microfilm of the city’s vast Department of Bridges photography collection when it struck him that many of the images shared a very distinct style. They also had numbers scratched into the negatives. It took many months and uncounted hours of trolling through the archives storerooms, the Social Security index, Census reports and city records on births, deaths and employment to find the answer: finally he found the answer to be the photographer was Eugene de Salignac. “It felt like a real discovery,” Lorenzini says.